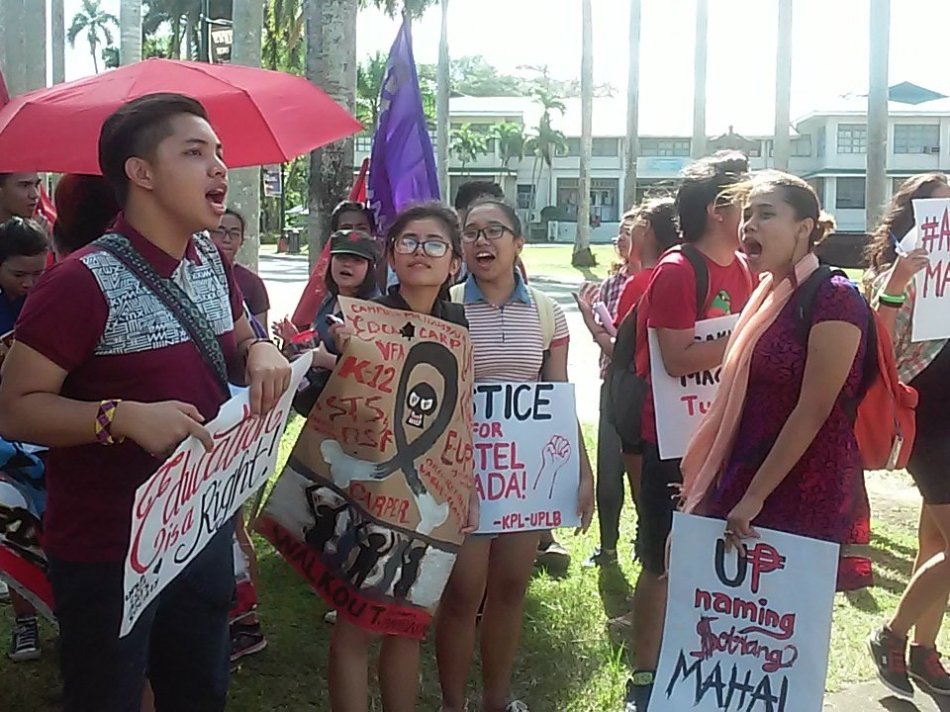 Students fight against the continuous tuition and other fees increase

Headed by the Rise for Education Alliance UPLB Chapter, a university-wide walkout was held at the Humanities Building this February 24, 2016 with a call to condemn the worsening state of education, brought about by commercialization schemes and student repression.

The death of Kristel Tejada from UP Manila, Rosanna Sanfuego from Cagayan State University, Jomari Azaula from EARIST, Nilna Habinun from Zamboanga, Sibugay and the latest suicide case of Jessevin Lagatic from Central Bicol State University were commemorated in the said event as they were labelled to be victims of state abandonment.

The protest started with a 20-minute program which was followed by a snake rally that headed first to the lecture halls of the Institute of Biological Sciences. Subsequent to it were the classrooms in CAS Annex 1 where Prof. Jison of PI10 in CAS A1 Gallery 1 allowed the students to join the walkout and Prof. Gruta of ENG2 in CAS A1 306.

The snake rally headed next to the CAS Annex 2 lecture halls and the College of Economics and Management grounds where a small stop was conducted to further express the rationale of the walkout.

Succeeding to the CEM grounds, the rally continued towards the College of Development Communication steps and held a small program where representatives from different organizations discuss the state of the academic freedom in the university comprising the issue of freedom of speech and expression when the administration filed charges against students and progressive leaders who took part in a walkout held November 13, 2015.

Following this was a stop at the College of Human Ecology as student leaders continue to convey their experiences about being barred from their right to organize by being subjected to the Organization Recognition Policy and Freshmen Recruitment Ban.

Students gathered to the Humanities Building as a final point and ended the walkout protest with the singing of UP Naming Mahal.