Mr. Salera depicts Uriel as respectful, thoughtful, loving, affectionate, and a kid with a good sense of humor. Uriel is known to his family as someone who stands against abuse, especially against women.

He also recalled that road trips with his son serve as their bonding activity. “Yun ‘yung panahon na nakakapag-usap kami ng medyo masinsinan, nag-re-range ‘yan from politics, science, to philosophy to religion.” Mr. Salera works in Lipa City, Batangas, and only gets to bond with his son on weekends.

How the day transpired

UPRC King Rancher Aliana Cotejo confirmed to the UPLB Perspective that their applicants were scheduled for training on that early Friday morning.

They scheduled the jogging at 5am. It is part of the applicants’ training process. “Halos lahat sila ay nagsasabing pagod na sila kaya naging walking na lang sila ng isang ikot sa Freedom Park,” said Cotejo. She said that the only medical concerns laid to them by Uriel were his mild scoliosis and dust allergy.

Given the nature of the organization, practicing the Rodeo sport, a strenuous physical activity, Cotejo admitted that there are no medical professionals assisting in the duration of the process.

Two of Uriel’s friends confirmed that he had difficulty walking after the jogging activity.

Malapaya stated that Thursday, August 11 was the start of the process, however Uriel had his interview with the organization on Tuesday, August 16. This is because he was staying in his home in Calamba, and cannot stay late in the campus.

She then added that on Thursday, August 18, Uriel asked for permission if he could stay in La Ville to rest after the jogging the following day.

Meanwhile, a friend who spoke to the UPLB Perspective under the condition of anonymity, recalled: “Around 8:30 pm, kita across yung Goldilocks, hirap sya [Uriel] maglakad pasakay ng jeep.”

According to the family, Uriel was unconscious and unresponsive. At around quarter to 12, his aunt facilitated cardiopulmonary resuscitation (CPR) for around 10 minutes. Uriel was later rushed to the hospital but still was not resuscitated.

According to the death certificate read by the family to the UPLB Perspective, Uriel died due to cardiorespiratory arrest. Furthermore, Mr. Salera said that he decided not to call for an autopsy so as to honor the body of his son.

Uriel’s wake lasted for three days at St. Peter Chapel and his body was laid to rest on August 24. 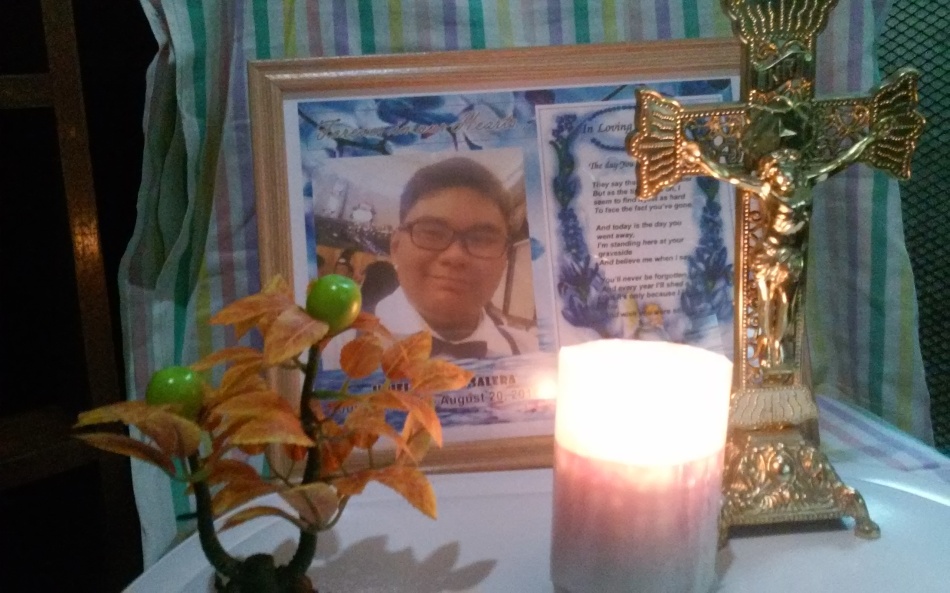 Dr. Salera has doubts on what really transpired that Friday morning.

UPRC’s Cotejo denied that there was a push-up activity on that Friday morning.

The family recognizes that while it is possible that the organization involved has no direct relation to the death of Uriel, the activities that transpired on Friday morning might have been contributory to the sudden departure of the 18 year-old.

The father lamented the young age of the members of the organization who attended the wake of his son. He also pointed out the lack of supervision during that particular activity.

The family also emphasized that all they want is for all student organizations in the University to be aware that their process for the applicants may lead to deaths, just like Uriel’s case. However, they still have a message for UPRC.

The family decided to not pursue cases against the members of the organization as of press time.

“It all boils down to them, not making an attempt to explain to us,” Mr. Salera emphasized.

The family disclosed that they are only waiting for UPRC to communicate with them and explain their side. They prefer to talk to the members of the organization together with their adviser.

“After ng libing, makikipag-usap sana talaga kami [kaso] tinatantiya namin kung kaya na makipag-usap ng pamilya pero parang hindi pa,” UPRC’s Cotejo said. She acknowledged that no communication with the family has been made so far after the funeral. Also, she confirmed the unavailability of their adviser but decisively claimed that nothing holds them back from reaching out to Salera’s family. “Nahihirapan din kami; hindi lang kami nawalan ng aplikante, nawalan din kami ng kaibigan, namatayan din kami.”

The UPLB Perspective has confirmed that Mr. Orlan Salera, father of Uriel Salera has sent a letter to the Office of Student Affairs. He is requesting Dr. Nina Cadiz to conduct an investigation regarding the death of his son.

When sought for a brief statement on Uriel’s death, the UPLB University Student Council (USC) expressed their deepest condolences to Salera’s family and friends. “Mahirap at nakakalungkot talaga ang pangyayari, and the least we can do for now is to get the details of the whole picture, avoid any hasty generalizations and sympathize for his loved ones and family,” the USC added.

Admin to UPRC: Don’t say anything

Cotejo disclosed to the UPLB Perspective that they talked with the Student Organizations and Activities Division of the Office of Student Affairs (SOAD-OSA), Office of the Vice-Chancellor for Community Affairs (OVCCA), Office of the Public Relations (OPR), and Los Banos Municipal Police.

The UPLB Perspective remains open to the side of the  OSA-SOAD, OVCCA, and OPR.