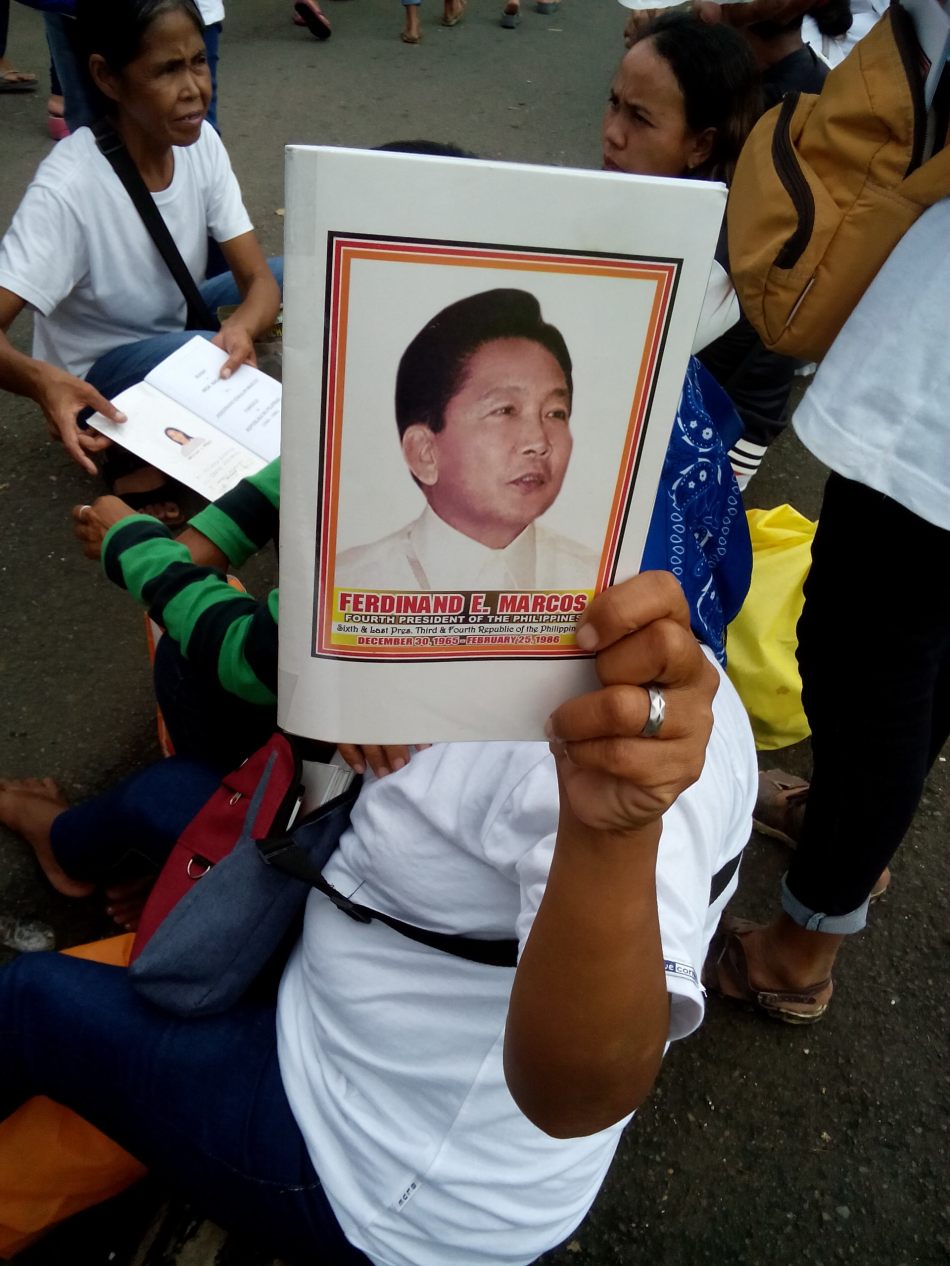 [FIRST UPDATE: 2:19pm, September 24] People, mostly ordinary masses, were promised a million pesos. Those who were to give the money away said the funds are from the wealth of the Marcoses.

One Saturday, they converged in an unlikely place: a campus which served as one of the hotbeds of militancy, opposition, and struggle during Martial Law.

Thousands of people, almost all clad in white shirts, arrived at the UPLB campus on September 23 for what is touted to be a general assembly of the One Social Family Credit Cooperative (OSFCC). Their program was held at the grandstand of the lower Freedom Park.

A woman speaker explained during the program that Bullion Buyer simply handles the documents for the turn-over of the alleged wealth of the Marcoses. OSFCC was chosen as a beneficiary, and thus, was tasked to distribute the money to the people.

However, it was not clear when BBL was transformed into the OSFCC.

So, where’s the money from?

The woman speaker said that there is a Grand Advisory Council that supposedly handles the wealth of the Marcoses. She also said that there are three sources of the said wealth, as follows:

UPLB Perspective was unable to verify the legitimacy and veracity of the last two groups mentioned. However, the FMCA was the subject of a case in 2014 in the District Court of the Hong Kong Special Administrative Region.

Reading a letter thanking these groups, she told beneficiaries during the program: “As the trusted recipient of the [Marcos] legacy, we are expressing our deepest gratitude for trusting us to implement your program to benefit the Filipino people.” She then ad-libbed, “Programa ito ni Apo Marcos, e. Ngayon lang natin ‘to nalaman.”

Apo Marcos refers to the former President Ferdinand Marcos. Apo is a term of endearment for revered people in family or in power in the Ilocano language.

The same speaker also mentioned making the Philippines a great nation again, where no Filipino will be “financially discriminated” anymore.

How will they distribute the money?

The cooperative claims to have the following workforce for the distribution of wealth to the people:

Each coordinator should have 300 beneficiaries before their area can become eligible for the supposed cash dole-outs, UPLB Perspective has learned.

Supposed beneficiaries were told that each family beneficiary will be given P1 million each. The money will be split in half:

The cooperative will open a bank account for the respective beneficiaries, where the latter’s shares of the wealth that’s supposed to be distributed will be deposited.

During the program, the beneficiaries were promised to be given P10,000 cash advance.

Being a beneficiary ain’t easy

To become a beneficiary, one has to have a booklet titled Life and Acheivements of Ferdinand E. Marcos. The booklet serves as the proof of membership to the cooperative. The booklet has to be stamped or signed as proof that the holder of the said booklet is eligible to receive the money supposedly due them.

But getting that booklet, which it seems is marketed as the key to the wealth of the Marcoses, is not as easy as it looks. The registration to become a beneficiary is done per barangay.

Typically, the booklet contains the name and 2×2 ID photo of the beneficiary.

In another part of the program, one man explained that he has been a member of the former Bullion Buyer since 2012. He then said he has been waiting for five years to claim the promised wealth from the Marcoses.

The same man said that in the National Capital Region, there are four million supposed beneficiary families. But he said during the program: “Ang nag-fillup lamang at pinili ng Diyos at ang mga hindi nagrereklamo ay 22,672 beneficiaries lang.”

How big can they be?

There were two noteworthy figures mentioned during the program:

If we are to believe OSFCC’s claim about the number of beneficiaries and the supposed procedure that each beneficiary will have P500,000 in capital share, they could be easily classified as a large cooperative, with billions merely in capital.

Assuming that all 22,672 beneficiaries in the National Capital Region will give P500,000 in capital share to OSFCC, the total capital from these supposed beneficiaries is P11,336,000,000.  In comparison, ACDI Multipurpose Cooperative, the largest cooperative in the country according to the Cooperative Development Authority (CDA), has P12.29 billion in assets as of December 2014. OSFCC’s figure is P954 million shy of the total assets of ACDI MPC.

Meanwhile, assuming that there are 281,476 beneficiaries who are supposed to give the same amount in capital share, the total capital would be P140,738,000,000. This figure would clearly surpass the P12.29 billion total assets of ACDI MPC.

Bullion Buyer Ltd., as it turns out, is plagued with complaints from various supposed beneficiaries, to the extent that the Securities and Exchange Commission issued an advisory against the company.

In its advisory dated March 8, 2017, SEC describes BBL’s operations as follows: “Those recruited are asked to pay thirty pesos (PhP30.00) in exchange for receiving ten thousand pesos (PhP10,000.00) per month through their Landbank ATM accounts for four (4) years and eleven (11) months starting February 2017.  This also entitles them to a grant of five hundred thousand pesos (PhP500,000.00) for livelihood programs.”

SEC then said that BBL “is not registered with the Commission as a corporation or partnership.” The commission warned the public to stop investing in the company.

As early as 2013, there have already been reports about BBL’s illegitimacy. Two members of the company were recommended to face estafa charges, a Philippine Star report  published in March that year said. The same report cited that these two members, named Felicisima Cantos and Emmanuel Destura, “introduced themselves to the complainants as caretakers of the assets of the late President Ferdinand Marcos” and that they “enticed the victims to invest” in BBL. Also in 2013, columnist Tony Calvento wrote a piece detailing the modus operandi of the said company.

In February 2017, Bombo Radyo reported about the proliferation of Bullion Buyer, this time in Baguio City. Having received many complaints about the company, city mayor Mauricio Domogan had ordered an investigation into the company. At around the same time, Sun.Star published a Philippine News agency report saying two other members of BBL were also arrested in Mangaldan, Pangasinan. The modus operandi: buy a Marcos booklet for P30, and you can claim P10,000 a month.

BBL was also able to reach Visayas. The modus operandi remains similar: submit documents, pay for a booklet, and you’re eligible to get P10,000 monthly. RMN Network reports up to 100,000 people were recruited by BBL in Negros Occidental.

In Saturday’s event, OSFCC said that they used to be Bullion Buyer Ltd. In fact, the registration forms given to the supposed beneficiaries still had the name of BBL in its header, UPLB Perspective has discovered [see photo below]. 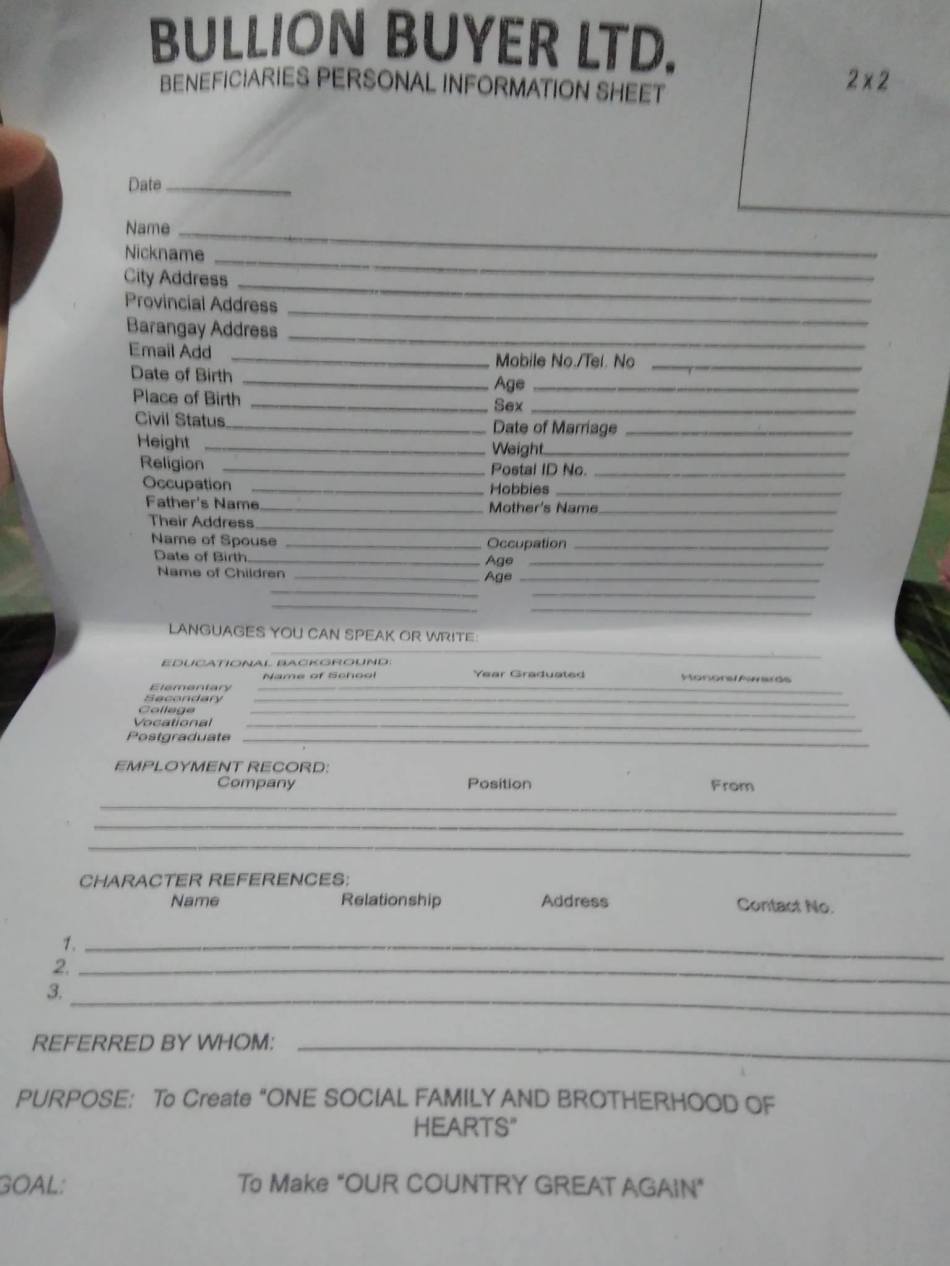 Former senator Ferdinand “Bongbong” Marcos, Jr. denied the supposed distribution of Marcos wealth, saying in a statement that it is “a fraudulent and massive scam.”

“We have repeatedly warned the public against unscrupulous individuals who have been using our family’s last name to advance their interests. Today’s event is a classic example,” his statement reads.

Yet another case of false hope?

In the middle of an interview with some supposed beneficiaries, one of them asked the UPLB Perspective correspondent talking to them, “Mabibigyan ba talaga kami?” Before asking the question, they told the Perspective that they were promised to be given something once they attend the program, but it was only during the program that they knew about the P10,000 cash advance.

They were promised money, wealth coming from a former President who plundered the people’s money. Whatever the motivations of those who went to the UPLB campus on that Saturday morning may differ from one another, but one thing is sure: they hoped for something that will change their lives, and we’ll never know if their hopes, just like all the other hopes of a nation marred with poverty and inequality, will transpire to reality. [P]