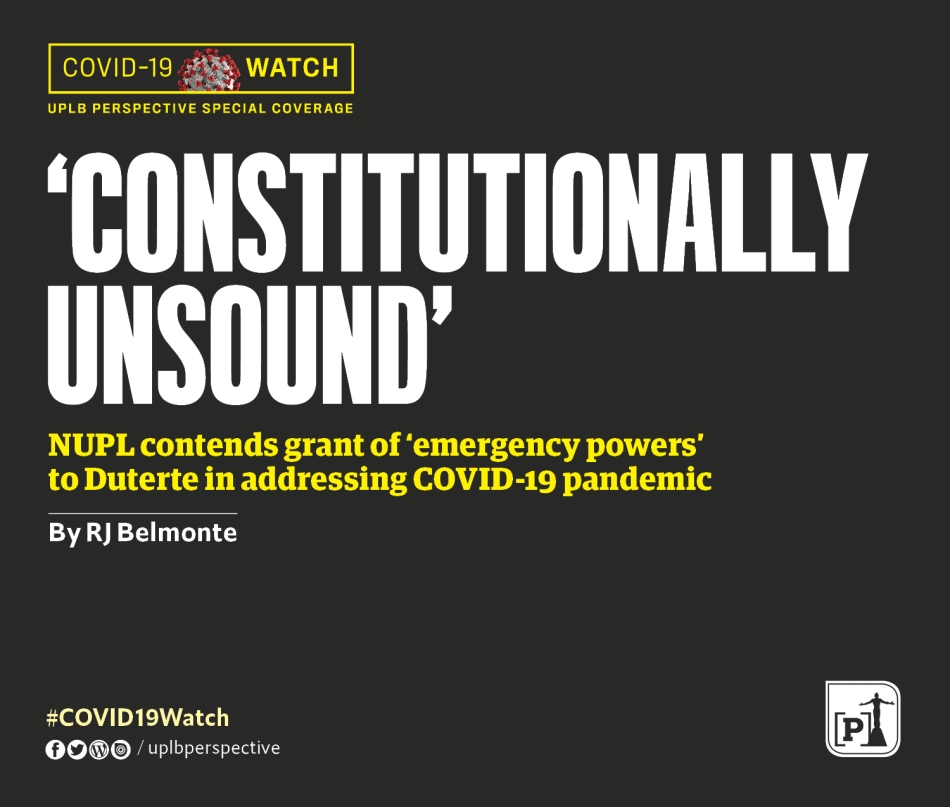 “To grant emergency powers to the President for the purpose of addressing the COVID-19 pandemic is constitutionally unsound.”

Albeit the existence of Section 23(2) of Article VI of the 1987 Constitution which states that the congress may, by law, authorize the President to exercise powers necessary and proper to carry out a declared national policy, NUPL President, Atty. Eder Olalia sees several of the bill’s provisions as broad and problematic.

Olalia highlighted two structures on the provisions included in the proposed bill due to its vagueness and lack of discernible parameters: the power to continue to adopt and implement measures to prevent or minimize further transmission and spread of COVID-19, and the prescription of penalties of imprisonment or a fine for any violation of the rules, regulations and directives of the National Government issued pursuant to the said proposed bill.

The former compels the law which delegates legislative power to be “complete” in all its terms and conditions, in that, when it reaches the President, the only thing the President will have to do is to enforce it. The latter, meanwhile, mandates adequate guidelines or limitations in the law itself to determine the boundaries of the delegate’s authority, hence, the measure for penalties of imprisonment or a fine.

Additionally, Olalia argued that among so many other problematic ones in light of the proposed bill such as centralization of budget powers, blanket takeover of communications, open-ended duration of the powers ,etc., the bill’s cited provisions fail to satisfy even the most basic standards for the delegation of legislative authority.

A section from the draft even measure amount to a general and therefore could be a grant of untenable power due to the absence of boundaries that could limit the President’s exercise of authority should the bill be approved to law.

“Both aforementioned provisions are simply too broad that, in effect, they amount to a relinquishment of Congress’s duty to enact laws that would govern the government’s response to the emergency at hand.”, Olalia said in the statement.

In fear of endless possibilities for the abuse of the proposed power as it could be uncontrollable and even fatal to democracy, Olalia asserted that the public health emergency in itself cannot and should not create power and that ‘omnipotent’ power to fight a potent invisible enemy is not the solution.

“Still, the Constitution – providing for a separation of powers and a system of checks and balances – was put in place precisely to prevent the concentration of power in one person or a group of persons.”

NUPL is a nationwide association of human rights lawyers as well as law students, paralegals and legal workers in the Philippines united by a commitment to the defense, protection, and promotion of human rights especially of the poor and the oppressed. [P]