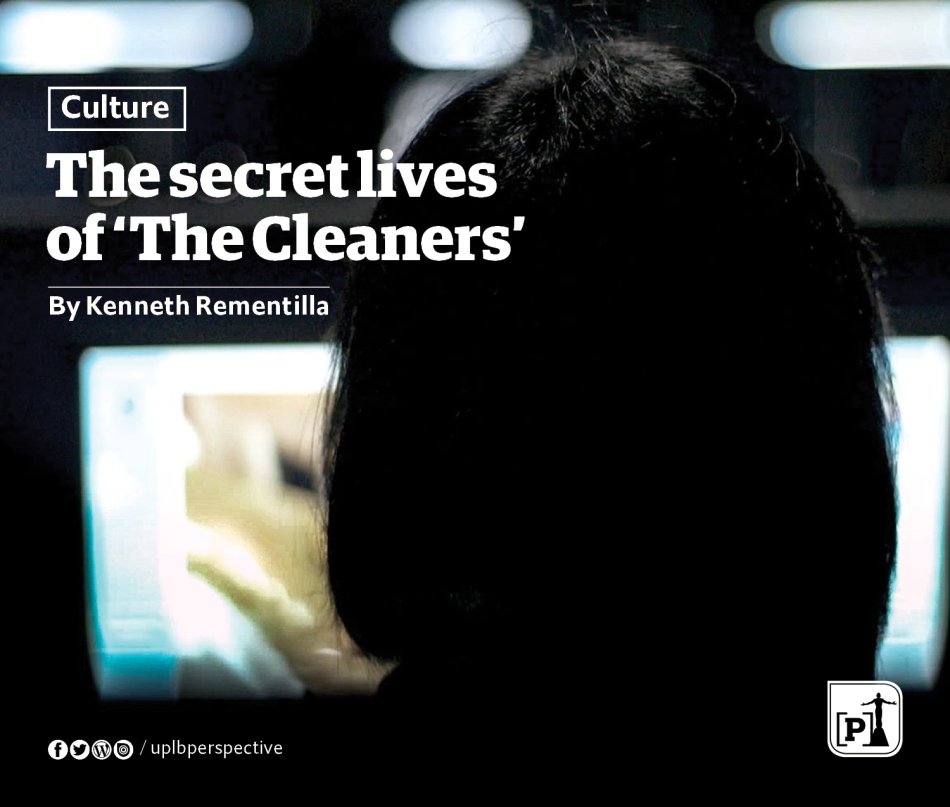 By Kenneth Rementilla, UP Film Circle

Facebook continues to dominate as the biggest media platform in the Philippines with over 75 million users. For most Filipinos, Facebook is equivalent to the Internet. It has become our primary source of daily news and updates, an avenue for selling and trading of goods, and even acts as a website where we can watch full-length pirated movies. Moritz Riesewieck and Hans Block’s The Cleaners (2018) documents the secret lives of content moderators whose job involves making major editorial decisions behind what we see every day on the network.

Content moderators are responsible for viewing and filtering user-generated content before it gets posted on social media. Their job is to ensure that data are in their right categories, especially when they contain illegal terms or content. The film follows real-life stories of content moderators working for a third-party outsourced company based in Manila that was hired by Facebook. In an office space surrounded by darkness with nothing but lights coming from monitor screens, the “cleaners” are interviewed about their thoughts on what they signed up for. They claim that they are “making social media safe” by deciding what kind of content should stay on the Internet. They choose two options: delete and ignore. The horror slowly unravels as it is revealed that their job strictly requires them to review a daily quota of over 25,000 images and videos related to pornography, terrorism, cyber-bullying, and suicide.

Riesewieck and Block’s documentary offers different viewpoints on how social media works and its effect on how people react. A renowned journalist in Manila criticizes Mocha Uson for calling a boycott of the media while the top fake news peddler has been branding her biased interviews with the president as “journalism.” An artist and photographer, who is also a survivor of the ongoing Syrian war, questions the decisions made by those who take down videos of happenings in Syria. A former top executive of Google asserts the importance of the site’s supposed “democratized platform” which they claim values freedom of expression. On another side, an ethicist discusses how outrage gets Facebook more attention.

The filma also explores the behind-the-scenes lives of the cleaners. One of them leaves her office and goes to pray in a Catholic church. She believes that, like Jesus Christ, sacrifices are necessary to make in order to make the world a better place. In her case, that is to remove sexual content on Facebook. It is because of her work that she learns new terms like “tits” and “buttplug” and goes to sleep dreaming about different kinds of penises. Another “cleaner”, an avid supporter of Rodrigo Duterte, claims that he protects users from evil. In the following scene, his idol, Duterte, talks about comparing his War-on-Drugs campaign to The Holocaust.

According to Facebook’s profile, its mission is “to give people the power to build community and bring the world closer together.” While this is true in the sense that we rely on the platform to keep in touch with friends and family, Riesewick and Block reveal the company’s lack of accountability and transparency that results in a dangerous system—especially for a democratic country like ours. In later scenes, it is unveiled how Facebook’s ambiguous reviewing guidelines do not permit specific types of news or information that would be considered bad for its users. Material involving bestiality get deleted in the same manner that evidence of human rights violations are removed.

In one scene, a blogger in Myanmar imparts how Facebook helps in spreading hatred against Rohingya, one of the many persecuted minorities in the world. Most people in their country might not have the means to be able to identify which information is authentic. The following scenes reveal how hate speech snowballed to hate crimes, with people breaking in a Rohingyan family’s home to hurt them. A two-year-old baby was thrown into a fire, a five-year-old child was thrown into the river, while their mother was abused and raped. If Facebook’s mission is “to build community,” what steps are the company (content moderators, in mind) doing to prevent this violence from happening?

The film makes it clear that Facebook’s quality review is questionable, and that profit-making is still their priority. Its workers clean the Internet’s darkest and deepest secrets at the cost of others’ lives—including their own. Not only are they forced to work a low-paying job without any insurance, but their mental health is also at great risk. One content moderator in the film trembles in fear and disgust while assessing child pornography. And another cleaner who specialized in self-harm content, who had requested the company to be transferred to other work several times, took his own life. The company kept it secret.

Photo still from The Cleaners, 2018