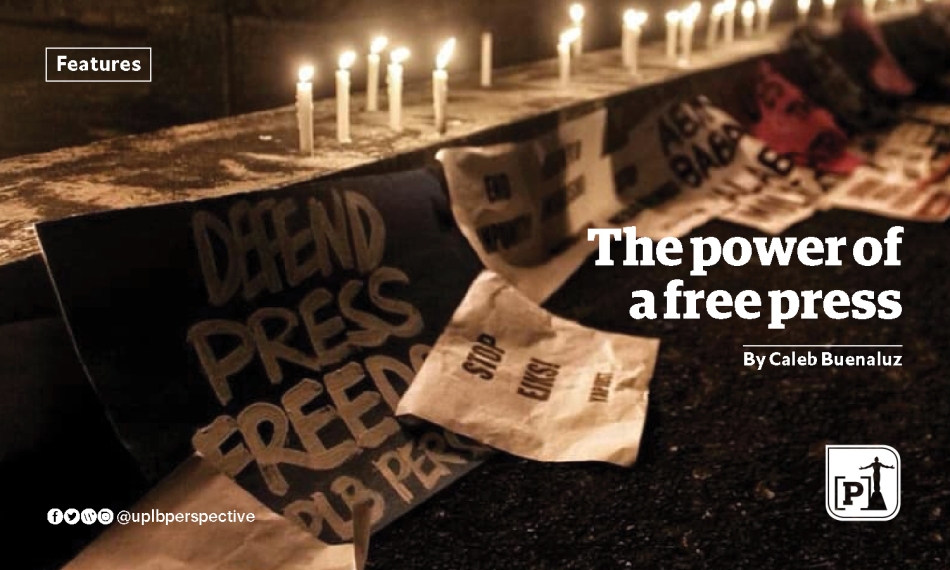 “Freedom of the press, if it means anything at all, means the freedom to criticize and oppose.” This was the very essence of journalism, and is ever more resonant now this World Press Freedom Day. Through years of political unrest, armed conflicts, or global disasters, media practitioners never overindulged in broadcasting the truth to the public.

In the face of total secrecy, the media continues to uphold their responsibilities in reporting and in criticizing. The bravery of media workers didn’t budge despite threats they encountered—even though it already violates their rights as journalists—and they continuously experience abuse whenever they expose the accurate information in public until now.

The World Press Freedom Day is celebrated around the world every 3rd of May, and is planned, organized, and promoted by the United Nations. The celebration aims to raise awareness of the people to the relevance of press freedom and professional ethics, to call support for media against the abolition to the press and to recognize the journalists who lost their lives in fulfilling their roles as a media worker. This year’s theme is “Journalism without Fear or Favour ” followed by the sub-themes of safety of journalists and media practitioners, independence from political from political and commercial influence, and gender influence.

According to the United Nation Educational, Scientific and Cultural Organization (UNESCO), they will provide online debates and workshops that will be open for everyone who would be interested, and they will launch a global campaign through various media and social media channels that will focus on the main theme for this year.

On May 1, the United Nations Secretary-General António Guterres urged that the government must protect journalists and other media workers to uphold press freedom. This is in light of different groups of the press having documented numerous cases of harassment against media workers under President Duterte’s administration, even though he mentioned last 2016 that he “would not be hesitant” from criticism whenever he commits a mistake on the job.

In 2018, the National Chairperson of National Union of Journalists of the Philippines Jaime “Nonoy” Espina reported that NUJP was attacked and red-tagged by tabloids as a “communist front”, followed by the Philippine News Agency who also did the same towards NUJP.

Last 2019, there were 128 cases of press freedom violations which were said to be encountered by different media groups in the Philippines under the Duterte administration since 2016. 12 Journalists were killed in the line of their duty, and there were eight cases of attempted killings. On social media, there were 18 cases of online harassment and five cases of cyber libel wherein Rappler CEO Maria Ressa was included, having been arrested twice and released on bail.

Last February, media giant ABS-CBN faced a quo-warranto as Solicitor General Jose Calida filed a 63-page petition to revoke the said media’s franchise. This was based on allegations that ABS-CBN was offering paid broadcast without the government’s approval, and allowing foreign ownership of the corporation. Law Professor Ted Te argued that the allegations of Calida cannot directly proceed to the Supreme Court.

Just recently on April 5, the Editor-in-chief of the Dawn, the official student publication of the University of the East was forced to make a public apology through social media right after he criticized the Duterte administration for handling the COVID-19 pandemic. The incident started when the journalist argued with his three former high school teachers in Nueva Ecija regarding his opinionated post on social media and one of his teachers threatened him to accuse cyber libel if he won’t make a public apology.

Human rights group Karapatan has reported that barangay officials have threatened him arrest for criticizing Duterte’s administration. The student immediately apologized to prevent the consequences ordered to him, but not after it sparked outrage from campus publications nationwide. The College Editor Guild of the Philippines (CEGP) and National Union Student of the Philippines (NUSP) expressed their support and defended the rights of the campus journalist.

Together with medical workers who fought hard but struggled to survive, there are media workers too who have lost their lives during the battle against the COVID-19.

Such are the likes of CBS journalist Maria Mercader, who has passed away due to the virus. Some have contracted the disease like CNN anchor Chris Cuomo, and a Radio DZMM employee who was exposed as a Person Under Investigation. On the other hand, there are also journalists who have luckily survived the virus like Howie Severino, a GMA veteran journalist who was confirmed positive last April but soon recovered after weeks of treatment.

“Just like the doctors and nurses on the front lines of this global pandemic, these dedicated members of the media are also taking part as front-liners working round the clock to bring vital information about COVID-19,” she said.

The Deputy Majority Leader also added that media workers still risk their lives against COVID-19 and perform their duties diligently to publicize the situation of the world, adding that they must respect and admire the members of the media.

As CEGP Southern Tagalog said in their press freedom statement, “the COVID-19 pandemic’s onslaught in the Philippines has only showed and proved further how vital to the nation’s affairs, to democracy’s very existence, and even to the survival of the people amidst the crisis press freedom is.”

To this day, press freedom remains to be a target of bureaucracy and corruption. The Philippines ranked 136th by the Reporters Without Borders (RSF) in the World Press Freedom Index 2020. The country’s media sector was cited as being plagued by numerous troll armies, and a spread of disinformation through social media.

Pressure came for journalists. Duterte’s administration waged a judicial harassment campaign against Rappler CEO Maria Ressa and leading TV network ABS-CBN. The former for being a vocal critic of the government, while the latter for operating despite their supposed long list of under the table activities.

This May 3, in observance of World Press Freedom Day, the Duterte administration reiterated their commitment in ratifying the constitutionally guaranteed rights for the press and freedom of speech.

The press has continued to stand tall in the face of several issues. Be it censorship and misinformation. This is true even in the time of the COVID-19 pandemic, when numerous media practitioners and activists are being arrested for expressing the truth. As CEGP ST said again in their statement, journalists would continue to be targets not just by the government, but even by the very people they swore to aid.

In another statement from UP Solidaridad, they asserted that even with all of the attacks, the press will continue to uphold the truth and to hold administratiosn accountable.

“Pagkat [n]aniniwala kaming marangal at mahalaga ang tungkulin ng mamamahayag lalo sa kabila ng pandemya, kaya nararapat lamang na ipagtanggol ang malayang paggampan nito nang walang banta sa buhay ng mga mamamahayag at mamamayan,” (As we believe that reporting even in a pandemic noble and important, it is is essential that we stand for the press to be free, without a threat looming over any life, even those of a reporter).

On this World Press Freedom Day, the press stays firm in performing its duty in informing and criticizing. The press is here to stay. [P]

0 comments on “The power of a free press”