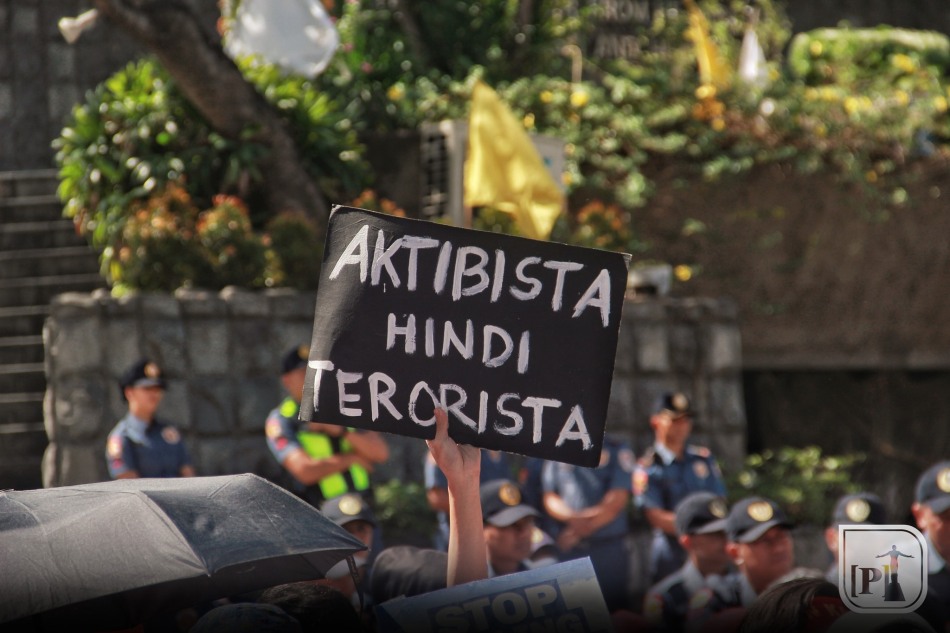 (UPDATE AS OF MAY 27, 2020: Chancellor Fernando Sanchez has now released a statement on the propaganda video of NTF-ELCAC. Sanchez said that the university is “committed to protect the rights and safety” of its students and that they should not be villified for expressing dissent.)

After a student demonstration in the University of the Philippines Los Baños (UPLB) was featured in a propaganda video of the National Task Force to End Local Communist Armed Conflict Video (NTF-ELCAC), Defend UPLB, a student alliance that safeguards academic freedom and the rights of UPLB students, called for assurance of safety and acts of denouncement from the UPLB admin, as it may endanger the lives of students who participate in demonstrations.

In a letter addressed to Chancellor Fernando Sanchez Jr., Defend UPLB explained that in light of the featured demonstration on the narrative of the video, the students might be wrongfully labeled as communists, which could pose a threat to the students who appeared on the video and put them into risk of persecution.

“It [Defend UPLB] has reached out to UPLB Chancellor Fernando C. Sanchez, Jr. to stand with the students in ensuring the safety of UPLB’s constituents as a peoples’ university and for the Chancellor to publicly condemn NTF-ELCAC’s actions… The NTF-ELCAC has maliciously used this video to tell a National audience that UPLB students and organizations are Communist Terrorist Groups,” Defend UPLB said.

The said video posted on the NTF-ELCAC Facebook page entitled “Mother’s Day 2020” featured statements from individuals stating that progressive organizations are “fronts” and “recruiters” of the Communist Party of the Philippines-New Peoples’ Army-National Democratic Front of the Philippines (CPP-NPA-NDF).

Jasper Sunga, Chairperson of the UPLB University Student Council (USC), condemned the NTF-ELCAC propaganda video, stating that these acts of red-tagging should not be tolerated by anyone.

“The UPLB USC denounces the inclusion of the clip from a mobilization held here in our university for the propaganda of NTF-ELCAC. Red-tagging should not be tolerated as it puts in danger the lives of people progressive or not. Numerous death threats, illegal arrests, and other forms of human rights violations are possible implications of red-tagging,” the chairperson stated.

Meanwhile, Juan Sebastian Evangelista, Editor-in-Chief of the UPLB Perspective, one of the Defend UPLB’s allied institutions, declared that the said incident is a way of intimidating dissenters, and lambasted the administration for using state forces to silence their critics.

“The blatant red-tagging by the NTF-ELCAC not only endangers the lives of students fighting for better services, but it also sends a clear message that the administration does not tolerate any kind of criticism. It only shows that this administration would rather silence activists and critics rather than addressing the problem itself. We are left with an administration justifying its incompetence through the use of the military,” he said.

Defend UPLB also reported that there have been several cases of harassment such as death threats among students, employees, and Non-Government Organization (NGO) formations since then. Most recently, student volunteers of the Serve the People Brigade Task Force Community Unit Response (STPB TF CURE), a Los Baños-based humanitarian group, have received 11 death threats from anonymous senders labelling them as terrorists.

“While these student leaders are currently doing humanitarian work with their relief efforts during this pandemic, anonymous sources have sent threats of knowing where they live with even more threats of illegal arrests or killing,” the alliance said.

The anonymous messages also contained silencing threats over the student’s legitimate dissent, and surveillance of their homes at different days and time frames.

The alliance also disclosed that student activities inside and outside the campus have been monitored by police and military elements, and other programs serve as an avenue to red-tag students, as what happened in the NSTP module incident last school year. (READ: https://bit.ly/2WW1b8g)

Moreover, the alliance, alongside with their member councils, organizations and allied institutions, condemned the said incident, explaining that red-tagging has no place in the university and it is the Chancellor’s role to protect its stakeholders from external forces that might endanger their academic and democratic rights.

“Ensuring that our schools, universities, and colleges are safe from harassment and harm, students and communities expect institutional leaders like our University Chancellor to safeguard student security and academic freedom which is the very right to study, believe, investigate and discuss investigation of social issues concerning the country. To trample this would be to trample our human right of expression and free experience of democracy,” Seth Pagulayan, spokesperson of Defend UPLB said.

It is known that in a student dialogue held last October 23, 2019, Chancellor Sanchez committed to maintain UPLB as a safe haven for its stakeholders. (READ: https://bit.ly/2WXBFQ3)

At the time of writing, the UPLB Office of the Chancellor (OC) has not responded to the said issue yet. [P]