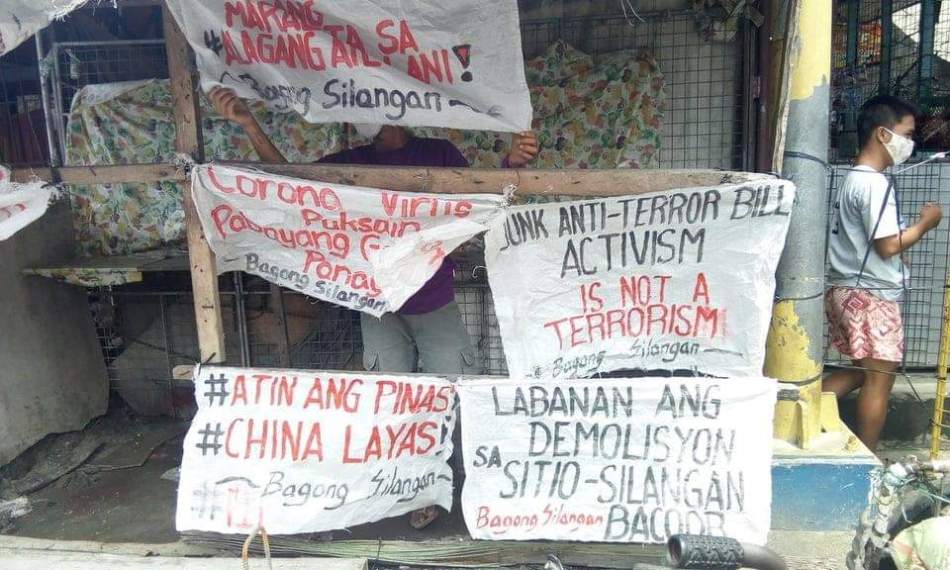 In multiple incidents, security guards of the Proteger Security Agency were spotted harassing and conducting illegal surveillance on residents of Sitio Silangan in Niog I and Talaba VII.

On July 29, at least ten security guards of the Proteger Security Agency were spotted taking pictures of households of Sitio Silangan. According to urban poor group Bagong Silangan, the security guards were unable to show any documentation or permits allowing them to conduct their surveillance. Their only justification was that they needed to do it in order for them to earn their wages from their agency.

The security agency was reportedly contracted by Amy Gawaran, an alleged representative of JSGHM 88888, the developer accused of conducting attempts to illegally seize land in Sitio Silangan. The developer had never introduced themselves to the residents.

Before the onset of the pandemic, there had been attempts to evict residents through forceful acts such as the burning and demolition of households. Amid the pandemic, the harassment continues and remains evident. The acts of harassment include forcefully closing off multiple entry points to a community in Sitio Silangan.

Having less and smaller entry points would pose a challenge to emergency transport and physical distancing.  The entry points are guarded by private security guards and barangay officials while the residents are prevented from guarding their own protest camps.

On the same day, security guards from the said agency were spotted cordoning off a gated entrance to a community in Sitio Silangan. The security guards prohibited a resident from bringing in his sack of sand and forcefully confiscated it. Bagong Silangan states that the prohibition of bringing essentials in and out of the community is a form of “economic blockade” and is a crime against humanity.

Three days later, on August 1, at least seven security guards of the Proteger Security Agency, who were not in their proper uniforms, wrecked a protest camp of residents of Sitio Silangan.

In addition, Bagong Silangan also mentioned that Gawaran and JSGHM8888 filed cases of estafa against some 377 residents of Sitio Silangan, but these “fabricated” cases were scrapped in the prosecutor’s office.

Currently, Bagong Silangan filed a petition for review to the Department of Justice (DOJ), challenging the “fabricated” case of “other deceits” also filed by Gawaran and JSGHM 88888.

Bagong Silangan states that the Bacoor City government under Mayor Lani Mercado-Revilla have not responded to the harassment of the alleged land-grabbers, and that their seizing of land is in line with the plan of the LGU to put up a new “business hub” in the city. [P]