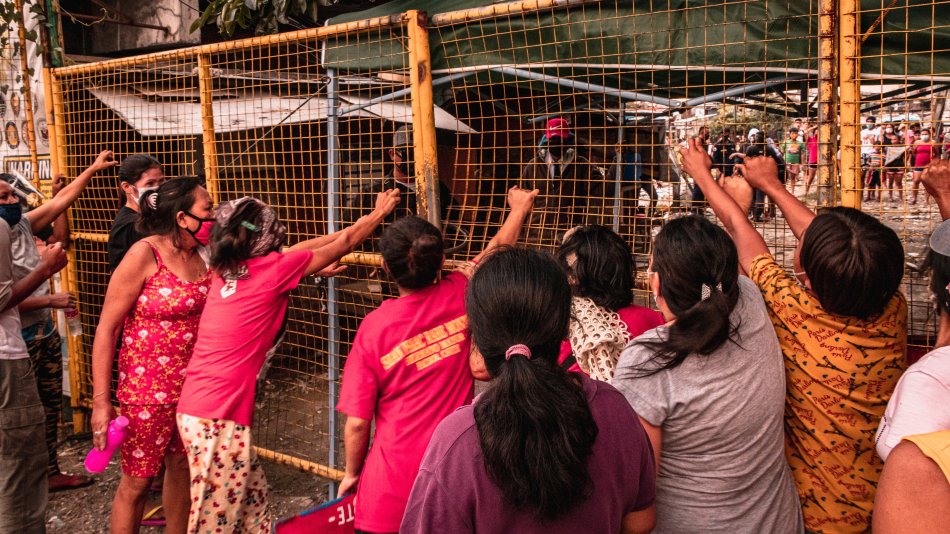 Armed guards opened fire on protesting Sitio Silangan residents on Martial Law day, September 21. This was the latest in a recent string of attacks on the urban poor Bacoor, Cavite community.

Prior to the incident, residents had been demanding for their right of way in the gateways Sitio Silangan in Niog I and Talaba VII, which were blocked and guarded for weeks, limiting the movement of the residents. Those present in the incident were protesting to assert their housing rights.

Urban poor group Bagong Silangan described the limits in the right of passage to be a hindrance to their daily lives.

Bagong Silangan later claimed that alleged JSGHM 88888 representative Amy Gawaran gave the order to fire. Gawaran, who allegedly claimed that the Sitio Silangan land belonged to the company she supposedly represents, and her alleged co-conspirator barangay officials were said to have been using the lockdown to limit the movement of the residents by blocking gateways to supposedly curb the spread of COVID-19.

Additionally, they claimed that the lockdown is nothing more than a ruse.

Although it was initially reported that three were injured, Asuncion claimed that there were no injuries.

BAYAN Cavite and Bagong SIlangan called for formal investigations on the incident.

This land is our land

In recent months, Sitio Silangan became a hotspot for cases of land-grabbing and harassment. Some could be linked to the Bacoor local government unit’s (LGU) infrastructure program known as Proyektong Kaunlaran. Bagong Silangan also mentioned that Bacoor mayor Lani Mercado-Revilla remained quiet all throughout the situation, her administration is gunning to develop a business hub there.

Around January, about 462 residents were charged with estafa and other cases, after B.E San Diego, Inc. representative Ana Marie Pagtakhan allegedly forced residents to tear down their banners in their protest camps. This encounter soon escalated when an unknown man was said to have drawn a gun in that incident. Residents later held a protest in front of the Bacoor Hall of Justice last February 19, denouncing the attacks.

The debacle over the lack of proper passage was being discussed as far as July, when reports stated that the limitations made it impossible for emergency responders to move and for physical distancing to be observed.

Gawaran was also mentioned in a July 21 incident, when at least ten members of the Proteger Security Agency were reportedly seen conducting illegal surveillance for no apparent reason other than doing so for their wages.

The attacks continued last August 1, when seven of the Proteger Security Agency were reported to have torn down one of the protest camps as an intimidation tactic.

Then again on September 11, when Anakbayan Cavite reported that Pagtakhan was once more harassing the residents through security personnel in civilian clothing. This time, they brought blades, ropes, and guns to block one of the largest passages to Sitio Silangan.

On September 17, Bagong Silagan reported of Pagtakhan’s latest attack, when residents received notices for a hearing. This is despite the aforementioned over 400 residents having their cases already dropped due to a lack of probable cause, with remaining cases to be settled this December 2 at the Municipal Trial Court (MTC).

As of writing, the attacks seem to persist even beyond the shooting incident.

In less than 24 hours, between September 26 and 27, guards were reported to have been intimidating residents with guns drawn.

While citizens and advocates mobilized for the 48th anniversary of the Martial Law by late dictator Ferdinand Marcos, tensions grew between activists and authorities.

All on the exact same day when the shooting in Sitio Silangan took place.

Policemen in Manila dispersed and allegedly harassed a group of 27 women who were protesting in support of a petition against the Terror Law outside the Supreme Court, according to lawyer Virginia Suarez.

While Suarez said that distancing was observed in the protest, police Lt. Col. Alex Daniel, new police commander for Ermita in Manila, claimed that the protesters were not practicing such and that some were not wearing face shields.

Daniel added that all groupings in Manila are acted upon by the police  and that the police have long been strict in enforcing social distancing. He also said that “only sometimes” like in the opening of the Baywalk was action delayed due to the surge of people.

In a Tweet from Anakbayan said that at 5 P.M., protesters at Valenzuela People’s Park had their protest materials confiscated, and were forcefully arrested and brought to the Valenzuela City Police Station.

In a Facebook post, Panday Sining Batangas said that policemen in Albay were found gathering around before a mobilization commenced. The group added that not only were the policemen not practicing social distancing, but that their presence is a form of intimidation towards progressive individuals and organizations with only placards and calls.

In another Anakbayan Tweet, the group said that police were found tailing a caravan of youth activists in Manila heading towards Quezon City with one van, two patrol cars, and several motorcycles. [P]