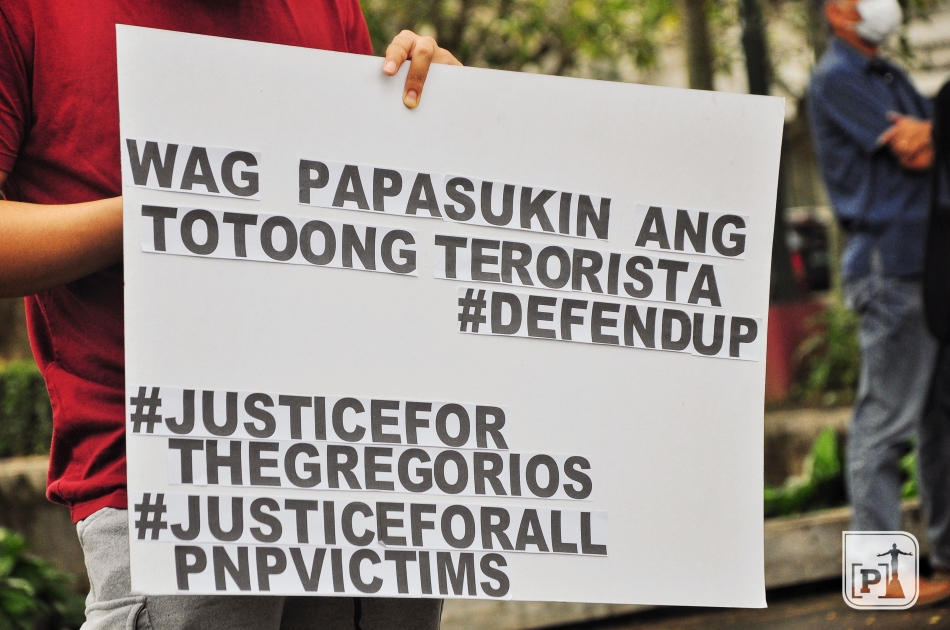 “Let us work together, in UPLB-PNP Joint Initiative for Peace and Security”

The sentence, plastered in white, accompanied by the picture of the Philippine National Police (PNP) national headquarters were all it to bring the UPLB community into a frenzy.

In a January 29 Facebook post, PNP teased a partnership between them and the UPLB administration, with the latter allegedly agreeing “to foster better cooperation and understanding on peace and order and security issues in the state university campus.” This was after Chancellor Jose Camacho, Jr. and other UPLB officials visited the Laguna Police Provincial Office (LPPO), which reportedly focused on matters including campus security.

Key points from the post included the crafting of memorandums for a February 2021 program known as “UPLB Ko, Bantay Ko” and an “Off-Campus Graduate Program on Strategic Planning and Development Management” for certain LPPO personnel. Additionally, there were also mentions of “police mobility,” investigation and arrest training, as well as drug awareness seminars.

“The PNP seeks to build stronger collaboration among stakeholders to protect campuses against criminal activities, drug syndicates, and organizations that promote and espouse Local Communist Armed Conflict against government thru force and violence,” they said in the post.

However, Camacho himself, upon getting word of the situation, immediately said that no such deal took place.

“There was no agreement [discussed]. No [talks of] communism or red-tagging,” he told the publication through a phone interview, emphasizing that the visit was to assert the UP-DND Accord in the midst of its abrogation at the hands of the Department of National Defense (DND).

The Accord is an agreement between the university and DND that would restrict campus grounds to any state agents, from police officers to soldiers, to assure that academic freedom was upheld (READ: UP strikes back against Accord “termination”).

A day prior to the post, the UPLB website posted an in-depth report regarding the meeting. In it, the UPLB administration, together with the Laguna Police Provincial Office (LPPO), as well as Gov. Ramil Hernandez and Rep. Ruth Mariano-Hernandez discussed attempts at “strong community relations at the provincial level.”

It is noticeable, however, that the report did not reference the PNP at all, with the UPF and the LPPO being the only “police” mentioned.

While Camacho said that he would be seeking further details on the UPLB Ko, Bantay Ko initiative in the phone interview, the report said that it is a 2012 information and security training program done in collaboration with Los Baños police and its local government unit (LGU). It said that this was among the possible activities being discussed to fulfill the agenda.

Seminars for drug awareness, and training sessions for investigation and arrests are explicitly mentioned, but are revealed to be more for the UPF and not for the UPLB community, as mentioned by PNP. Additionally, such events would be spearheaded by the LPPO instead.

Moreover, while PNP said that the UPLB officials agreed to holding quarterly coordinating meetings or emergency meetings with personnel of LPPO, Los Baños Police, and barangay chairpersons working around UPLB campus, there was no mention of this in the report. However, it did say that there are ideas for infrastructure programs to help in easing traffic flow for UPLB constituents and nearby barangays.

The idea of “Off-Campus Graduate Program on Strategic Planning and Development Management” also had a different context in the report, in that the administration was merely inviting LPPO staff to try the program. As with many others mentioned beforehand, there was nothing to suggest that a proposal for a memorandum of agreement (MOA) was in the cards.

Finally, Camacho explained that this support of the local police’s “mobile capability” pertained to a gas assistance program of the university that began in the term of then-Chancellor Rex Victor Cruz, with the report mentioning a “gasoline ration” for Los Baños police and Sangguniang Barangays. Camacho said that this was done in light of the murders of Given Grace Cebanico and Ray Bernard Peñaranda for swift emergency responses.

Peñaranda, an agriculture student, was held-up then stabbed to death near UPLB in 2012, while Given Grace Cebanico was a UPLB computer science student who was raped and killed also near campus grounds in October 2011. (READ: #LetJusticeBeGiven candle-lighting, isinagawa)

In a separate statement, Camacho said that the 1992 DILG-UP Memorandum of Agreement is still in effect, which stated that the entry and presence of PNP personnel on campus remains prohibited except in hot pursuit operations and when their assistance is requested by the university.

“Any insinuation of any ‘agreement’ with the Laguna PNP that does not conform to the purpose of our visit is not true. The university will always be a safe haven for the freedom of speech and expression and a venue for voices that cry for social justice and human rights,” Camacho said.

In a Facebook post last Friday, the UPLB University Student Council (USC) denounced PNP’s pronouncement and exclaimed that the state force is not welcome in UPLB.

“The council finds the pronouncement of the PNP very alarming. UPLB is no different from other SUCs redtagged [sic] and are violently harassed by members of the PNP. Lest we forget, there was an instance where police officials entered the campus premises during an NSTP forum to red tag numerous organizations in the university, including some UPLB alumni,” the UPLB USC said

The UPLB University Freshman Council (UFC) also lambasted the PNP for claiming that agreements between it and the UPLB officials were made.

“How can we trust the PNP if they would continue these occurrences of misinformation, red-tagging, and harassment?,” the UPLB UFC said. [P]