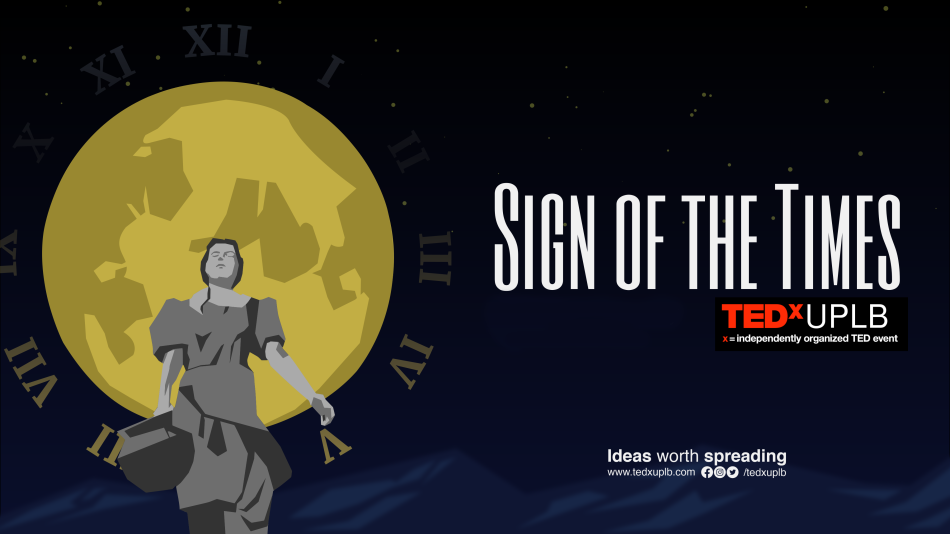 From agriculture to cinema, six speakers talk about recent ideas that have made a splash on the Philippines in the pandemic.

The TEDxUPLB team showcased ideas worth spreading through Zoom and Facebook Live last May 2 in Sign of the Times. Originally supposed to take place last year, the project was postponed because of the COVID-19 pandemic.

A year into the new normal, the team brought back “Sign of the Times” to continue the organization’s goal of creating a social movement and sparking discussion.

“Sign of the times highlighted ideas that have emerged in the past, manifested in the present, and can possibly affect the future. Since we postponed our event due to the pandemic, we still used the same theme then included how the global outbreak has affected the present and may disrupt the future,” TEDxUPLB lead organizer Joshua Ignacio said.

Engr. Che Abrigo — who earned her Master of Science in Environmental Science from the University of Auckland — utilized her background in chemical engineering, environmental science, and project management in adding depth to her talk.

CSA is a system that connects farmers and consumers directly by allowing the consumer to subscribe to the harvest of farmers. It cuts the middleman and makes sure that the farmers are well-compensated for their work while keeping the price fair for consumers. Engr. Abrigo emphasized how this system allows us to better support our farmers who have been providing for us through thick and thin.

Throughout the event, Twitter users shared their learnings and ideas from the program.

According to Twitter user @shaptorres, “Engr. Abrigo’s talk really gave light to the relationship between consumers and farmers and our understanding of these sectors. At ngayong pandemic, ang sayang tingnan na umuusbong ang pagtutulungan ng bawat isa. Thank you for your talk, Ma’am Cherrys! #TEDxUPLB2021.”

How generational labels conceal more than they reveal

Dr. Cornelio is currently the director of the Development Studies program at the Ateneo de Manila University. He finished his PhD in sociology at the National University of Singapore. He has published pioneering journals around the world and has received the 2015 Virginia A. Miralao Excellence in Research Award from the Philippine Social Council and the 2017 Outstanding Young Scientist Award from the National Academy of Science and Technology.

In his talk titled “How generations are formed,” Dr. Cornelio said that generational labels that are widely used are actually marketing tools towards the youth. However, by using such labels, advertisers ignore the inequality experienced in what is actually a fragmented generation.

“Young people are not a homogenous sector. Calling the youth ‘adventurous, woke, and passionate’ is negligent of the realities of the majority for whom these characteristics are a privilege,” Dr. Cornelio said.

Dr. Cornelio continued by saying that recognizing the fact that we are divided is what can bring us together. He also added that we cannot be only talking about people like us but start representing those who are divided by us.

Lessons from the Black swan and the Red queen

Microbiologist Dr. Jomar Rabajante then tackled biomathematical models to overcome risks in his talk, “Risks driven by the Black Swan and the Red Queen”.

Dr. Rabajante earned his Doctor of Science degree in Mathematical and Systems Engineering from Shizuoka University. He is currently a fellow of the UP Resilience Institute and a member of the UP COVID-19 Pandemic Response Team. He is also a Professor and a UP Scientist at the Institute of Mathematical Sciences and Physics, University of the Philippines Los Baños. Furthermore, he is also an affiliate faculty member of the Faculty of Education, UP Open University.

A “black swan”,  Dr. Rabajante explained, is a rare event that comes as a surprise and has severe consequences, while the “red queen” is something that forces us to constantly improvise, adapt and overcome in order to survive and thrive. Coincidentally, the red queen is currently forcing us to adapt in the black swan we are experiencing right now: the COVID-19 pandemic.

How do we turn the black swan into a white swan and how do we outrun the red queen? Through science and evidence-based data, Dr. Rabajante answers.

“We assess the root cause, we decide based on evidence and data, we map scenarios, and we invest in knowledge, insight, and foresight generation,” Dr. Rabajante said.

Twitter user @sentimentaI___ shared their thoughts on Dr. Rabajante’s talk by saying, “[sic] it’s really sad that our society has evolved so much and yet we still doubt evidence-based data. just last year we had to explain multiple times why we need mass testing in the Philippines to help minimize the COVID cases in our country.”

Ensuring our health by ensuring the planet’s health

Dr. Flores said that while we are currently the dominant species, we are not safe from extinction. He added that we have also become parasites in our own home, and just like any parasites, we will be obliterated when our host dies. We are then responsible for the Earth’s health.

Dr. Flores — who is a pioneer in introducing Planetary Health into the Philippine academia — earned his PhD in Engineering and Master in Engineering from Osaka University. Currently, he is a Board Member of the Philippine Society for Microbiology, PHILAJAMES and the Coalition for Agricultural Modernization in the Philippines, Inc. He also serves as a faculty member at the Institute of Biological Sciences of UP Los Baños and an affiliate faculty member of the Faculty of Education in UP Open University.

Dr. Flores feared that our epoch may be remembered as the time when humans, who have the highest form of intelligence, were not able to do anything to sustain the planet.

Twitter user @itsmemabato reacted by saying, “Humans indeed have become the parasite. It will take everyone to heal the planet. [A] Very thought provoking statement of Sir Onille from #TEDxUPLB2021”

The fate of art and cinema

“The 2020 pandemic will pave [for] a new way on how we consume and see art forever, and where cinema fits in the next generation of viewing, we will all have still yet to find out,”  producer and filmmaker E. Del Mundo said when talking about the effect of the health crisis on the people’s consumption of art.

In 2020, Del Mundo co-produced “Hayop Ka! The Nimfa Dimaano Story”, the first animated Netflix film from the Philippines. She also directed the first season of the hit web series “Manilennials”. At the 13th Cinemalaya Film Festival, E bagged the Best Director Award for her short film, “Manong ng Pa-Aling.” She also produced “Kuya Wes” that premiered at the 14th Cinemalaya, and competed in Fantasporto and Shanghai International Film Festivals. She was among the few women selected to participate in the Women in Film’s Mentor Circle in Los Angeles.

With the dawn of Netflix and other digital platforms and the lockdown prohibiting moviegoers from visiting movie theaters, the fate of cinema is uncertain. Del Mundo discussed this and shared the experience of being in a cinema in her talk, “When the lights turn off: Farewell to cinema, a eulogy.”

Del Mundo said that while we may equate going to the cinema to “Netflix and chill,” the experience is not the same.

“Going to [a cinema] is a collective dreaming experience,” she reminded.

Twitter user @J_annColadilla shares the sentiment and said: “I really do agree with Mx. E that being in cinemas is still truly magical. It may be old school since Netflix and Chill is now a trend, but watching in big screens with ur loved ones among strangers? Mehn, still hits different.”

The ills of Glorifying Resiliency

Independent journalist Alanah Torralba discussed how she has become exhausted with the narrative of Filipino resilience dominating the media and the speeches of politicians in her talk, “Rethinking Resilience in the Climate Emergency Era.”

“There is nothing wrong with resilience. It is an admirable trait, that even in the grimmest of circumstances Filipinos can muster faith and hope in an unknown future. But, resilience can be easily abused,” Torralba said.

In 2017, as a journalist-fellow at COP 23 in Bonn, Germany, Torralba reported on the irreversible impacts of climate change. She had also become a photojournalist for the European Pressphoto Agency Manila bureau.

Nearing the end of her talk, Torralba emphasized that human beings are just that, human.

“Human beings are not damage-proof. No matter their strong or smiling exterior, people should be allowed to grieve when they experience loss. They should be able to rest with confidence that there is a social safety net that will take care of their needs when disasters strike.”

Twitter user @alexaecvs agreed, saying, “ [sic] let’s stop our politicians to take the narrative of resiliency for their own benefits. let’s stop the manipulation from these politicians and demand accountability. WE ARE THEIR CONSTITUENTS AND THEY MUST BE THE LEADER THAT WE NEED.”

The first TEDxUPLB was conducted last 2013 with the theme “Power to the People.” It was organized by a group of university professors. Since then, the organization has conducted three university events and three salons.

In selecting the speakers for this year’s event, Zairon Reyes from TEDxUPLB’s Curatorship Committee said that choosing ideas is more important than choosing the speakers themselves. TEDxUPLB focused on ideas that show how far we have become as a Filipino society and how far we still have to go. “In reality, there are just too many ideas out there that need to be heard by our audience. But we focused more on those that can be considered as our society’s breakthroughs, limited to those that gave significant impact to the growth of the nation, while still locally relevant in Los Banos,” Reyes added. [P]