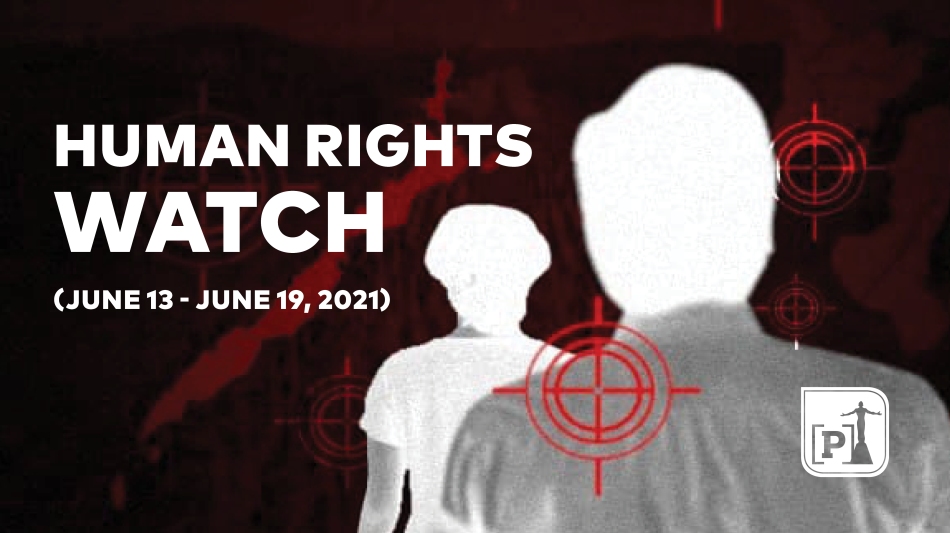 As Pres. Rodrigo Duterte’s presidential term comes closer to its end, progressives, as well as the families and friends of extrajudicial killing (EJK) victims and political prisoners among others continue to call for justice.

In the midst of these calls, International Criminal Court (ICC) prosecutor Fatou Bensouda requested for a formal investigation into the killings linked to the Philippine state on the day of her retirement. Even though Duterte only has a window of three months before ICC officially makes a move, the state of human rights in the country continues to decline.

From two state killings that reached mainstream coverage to even more cases of red-tagging, here are all of the other HRVs that have been reported this week.

Originally hailing from Sagay, Negros Occidental, Alegre, including his now widowed wife Moreta (detained in Correctional Institute for Women) and son Selman (imprisoned with the senior Alegre in New Bilibid Prisons) were all incarcerated for the trumped-up murder charge of a landlord’s bodyguard. The family was able to secure documents to keep their land, but Karapatan said that the aforementioned landlord managed to take the land upon their arrests.

“Let Moreta grieve out of prison, and let justice be served to their family. Let Jesus Alegre’s story remind us that the majority of the population are landless, treated like criminals when they choose to fight, and thrown to jail, with death as the only recourse to be free. There is no other fitting way to remember Jesus Alegre’s death, but to be reminded of the injustices that this system has engulfed the majority of our people,” Karapatan secretary-general Christina Palabay said.

Alegre was laid to rest last June 18, with both Moreta and Selman reuniting after 16 years in his wake.

UMA cites a report from Karapatan – Cagayan Valley, saying that last June 11, two UMA members were interviewed by police regarding the union’s relief operations sometime before the end of 2020 and questioned the sources of the donations.

The next day, the soldiers returned to and asked Aberion to take them to the homes of other UMA leaders, leading to UMA-Sta. Maria president Delia Remigio to also be red-tagged.

Finally, on June 18, five soldiers went to Aberion yet again, advising the secretary to go to an unnamed barangay hall the next day to clear their name and explain how he became part of the UMA. The soldiers asked to be led to the homes of the union leaders once again, but Aberion refused and insisted that there was nothing wrong or illegal in the work of the union.

Angel Rivas was only a 12-year-old sixth-grader from the Tribal Filipino Program of Surigao del Sur (TRIFPSS) Lumad school at the time of her death. Rodriguez and Lenie Rivas, meanwhile, were both members of the Lumad group Malahutayong Pakigbisog alang sa Sumusunod (MAPASU).

According to Karapatan Caraga, their bodies, presented as “belonging to members of the New People’s Army (NPA)” were brought to a military headquarters in St. Christine, Lianga.

Contrary to the police’s report that the two fought back, the group said that Antonio Castilio Dalitt, the adult, was said to have been shot in their home in Purok 6, Brgy. Landayan, San Pedro City, Laguna.

Meanwhile, 16-year-old Johndy Maglinte Helis was dragged into a marsh before being killed by policemen in civilian clothing. Kabataan Partylist Laguna adds that their bodies were found by a river near Brgy. Landayan and Brgy. Dela Paz, Biñan City. [P]