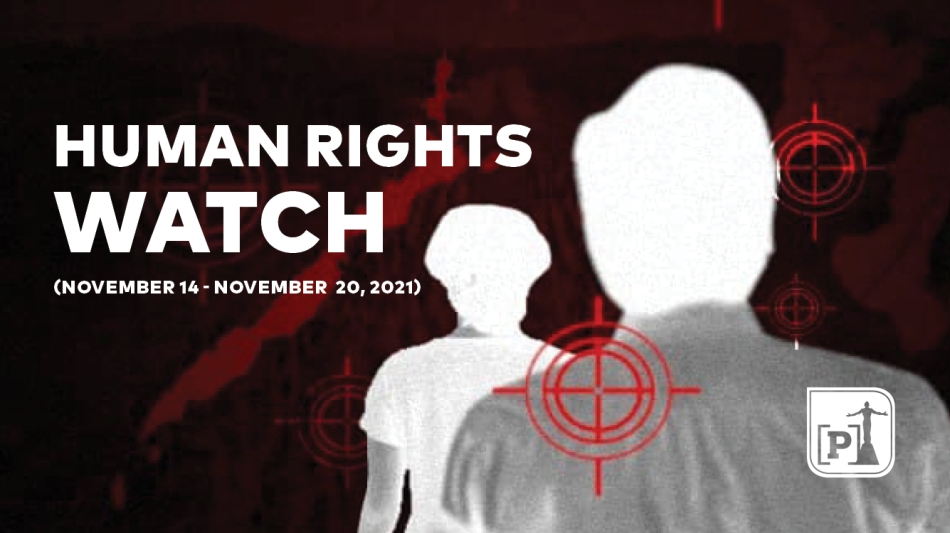 Last Thursday saw the death of political prisoner Antonio Molina while he was in custody, despite progressive individuals’ assertion that he must be released in light of his medical condition. This week also saw heightened militarization in Quezon province, as well as an arrest of a UPLB alumnus.

Here are the human rights violations reported this week:

Ma. Salome Crisostomo Ujano, alumnus of UP Kappa Phi Sigma – Conservation and Development Society (UP KPS-CDS), was arrested over a “rebellion case in 2005”, UP KPS-CDS says.

According to Ujano’s family, the arresting officers were dressed in civilian clothing and did not present any identity information. In addition, the arrest warrant that they presented was filed on November 20, 2005.

Ujano is currently the National Coordinator of the Philippines Against Child Trafficking and previously served at the Women’s Crisis Center.

UP KDS-CDS, a socio-civic environmental organization in UPLB, “strongly denounces” Police Regional Office 3 for claiming that Ujano is the “top most wanted person in Bulacan” and that she “hid for more than 15 years”.

According to UP KPS-CDS, they hold photos of Ujano participating in social activities from 2012 to 2019, to show that she “did not hide anywhere to escape any legal accountability”.

The quick response team of human rights organization Karapatan Southern Tagalog (ST) went to the municipal hall of Gumaca, Quezon on November 16 to assist the family of Roderick Sinas in taking his remains.

According to Karapatan ST, only a Philippine National Police (PNP) investigator faced their team, who then told them to talk to the Philippine Army.

The human rights organization adds that their team brought the necessary documents including the special power of attorney and proof of kinship. Despite this, Gumaca Municipal Police Station (MPS) still refused to release Sinas’ remains to his family.

Karapatan ST says that the Armed Forces of the Philippines (AFP) and PNP claim that Sinas was killed in an “armed encounter” last November 12.

Gabriela Women’s Partylist slams the PNP over “misspelled” tarpaulins of the partylist that were allegedly confiscated from “communist rebels” during simultaneous raids conducted in Quezon City and Bulacan.

Gabriela, however, pointed out that the tarpaulins contained a spelling error, particularly in the partylist’s slogan, “Para sa Babae, Bata, at Bayan,” with “babae” being misspelled as “babe.”

Gabriela Women’s Partylist condemns the “black propaganda” done by the police forces. They stated that this is one of the reasons for their criticism towards the proposed 2022 budget of the National Task Force to End Local Communist Armed Conflict (NTF-ELCAC).

Two farmers were killed by the military in Barangay Taquico, Sampaloc, Quezon, with their bodies marked by signs of torture, Karapatan Southern Tagalog reports.

Jorge Coronacion and Arnold Buri were claimed to have exchanged fire with the 59th Infantry Battalion of the Philippine Army (IBPA) before being eventually killed. Coronacion and Buri were also accused of being members of the New People’s Army (NPA).

Residents of their community knew Buri as a civilian farmer while Coronacion was a 66-year old handicap.

Molina has succumbed to complications of stomach cancer, after discontinuing his chemotherapy sessions due to his body’s inability to handle the treatment. A motion for his release in light of his condition was denied last September.

Molina has been imprisoned with six other peasant activists and human rights workers since 2019 for illegal possession of firearms and explosives, “evidences” planted on their vehicle.

A youth from Cavite was visited by a barangay official over progressive statements that they are sharing in social media, Anakbayan Cavite says.

The victim, who refused to reveal their identity in fear of harassment, claimed to have been intimidated by the same barangay official, saying that the police knows the personal information of their mother and even where they study.

Anakbayan Cavite highly denounced the intimidation of authorities against activists, and asserted that they must instead invest in more important sectors such as education and health.

The seminar, which reportedly took place as well in other barangays in Calamba City, was led by one Rico Cordero, supposedly a former member of the Communist Party of the Philippines – New People’s Army – National Democratic Front (CPP-NPA-NDF).

The seminar accuses organizations such as Anakbayan, Kabataan Partylist, and Bayan Muna as affiliates of communist organizations. Even senatorial aspirants of the MAKABAYAN Bloc, Atty. Neri Colmenares and Elmer “Ka Bong” Labog, were accused of being affiliated to the NPA.