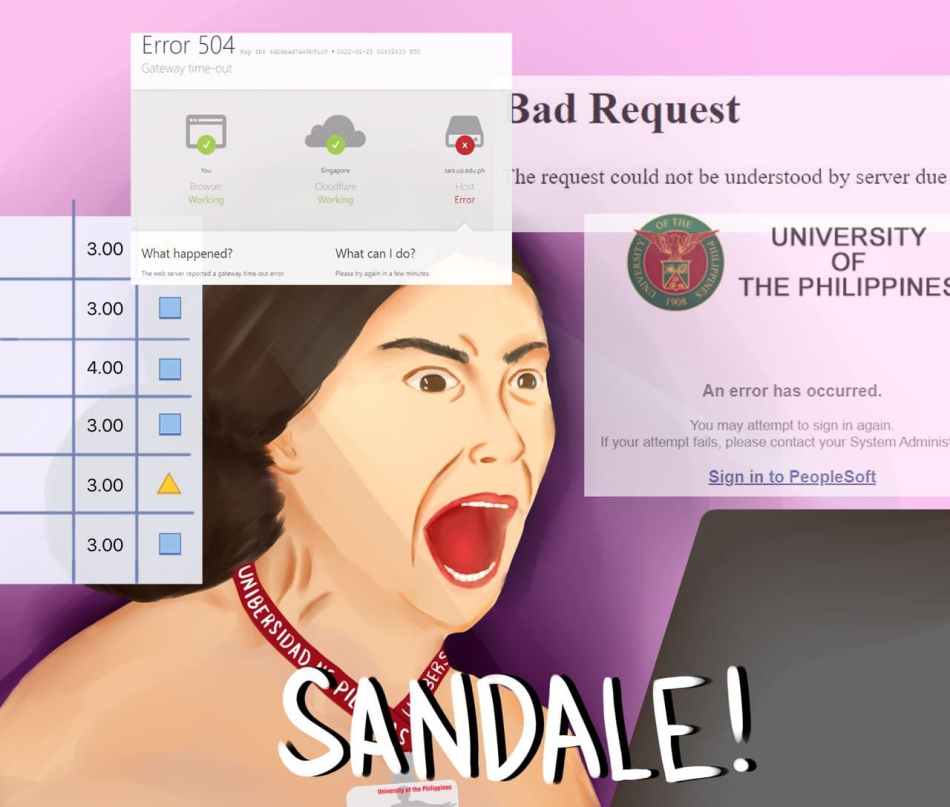 For those outside the University of the Philippines, the Student Academic Information System (SAIS) seems like a marvel that allows the students to choose their courses and schedule freely. Upon entering the university, I have come to acknowledge that none of this is true, as it is nothing but a system chock-full of issues that hinders efficient enrollment.

In my first months at UPLB, I have observed that SAIS is a running joke, often turned into meme content in social media. Most students, including myself, find this entertaining, mainly because it relieves the mood and stress caused by the enrollment system. However, a piece of advice from an upper-year friend made me realize that jokes aside, SAIS poses a serious threat to student’s well-being, she warned me, “Mag-ingat ka sa pagbibiro tungkol sa SAIS, lalo na sa mga underloaded. Pwede maging sensitibong usapan ‘yan para sa kanila”.

[“Be careful of joking about SAIS, especially to underloaded students. They might be sensitive about it.”]

SAIS was a huge turn-off right off the bat. Orientations and tutorials about the system usually recommend using a Mac OS, which immediately reveals its non-inclusive nature. Despite being included in a 5-year budget of P751.9 million for the entire Electronic UP (eUP) Project, and with a P46M budget from 2012-2016 to improve the student record system, it only further reinforced the perception that UP is only for the privileged.

My first enrollment experience on SAIS was a rollercoaster ride. That it was all luck was not a joke; even logging in to the main page took me 40 minutes. When I finally accessed the enrollment page, I had to reload it for 3 hours straight as it continued to spam me with page errors. It even got to the point where I had to bring my laptop with me to the sari-sari store, just to ensure that the page did not timeout during my absence. At 11:40 a.m., I was finally enrolled but only in 6 out of the 17 units that I initially planned to take. I was still lucky, considering that it only took me almost 4 hours, while some students still could not access the page past 10 p.m.

Despite being fortunate enough to have some units, I remained anxious with thoughts of being underloaded and delayed. As I scrolled around social media, I saw students bragging about their complete units. I know that they are within their rights to take pride in their achievement, but due to my lack of success with SAIS, it only added to the pressure that I was under. It wasn’t until then that I fully understood my senior’s advice not to make insensitive jokes or statements about SAIS.

As I pondered on the deficiencies during the enrollment, I realized that UPLB’s use of SAIS reflects our neoliberal society and its Kafkaesque bureaucracies. It has become an institution where students struggle and practically beg for units. The class struggle makes it even worse; only those privileged to have better gadgets and internet connectivity have the upper hand. Our education is free, but at the expense of our intellectual development, which is determined by the survival of the fittest.

Later that evening, our batch agreed that those who have acquired units should avoid accessing SAIS to give way to those who still cannot open the page. To be honest, I was tempted not to comply. I tried to convince myself that giving way was only a suggestion and that I desperately needed more units than I needed to prioritize others. However, my principles did not allow me to act so selfishly. To be fair, I do not blame my fellow students who chose to push for more units despite having a relatively adequate load than mine. I know for a fact that their actions and academic anxieties are valid and that the system’s inefficiency is to blame. In the first place, we should not be guilty of prioritizing ourselves. The burden of securing the needs of our fellow students should not be ours to bear—this responsibility belongs to the UPLB administrators.

Despite all of these issues, I have seen that SAIS could not easily shake the resolve of the studentry to stand for the better. I have witnessed them develop a level of trust that allows them to exchange their UP accounts to help one another enroll. Some even gave their extra units to underloaded students generously. However, this should not serve as a basis to romanticize student unity.
Hundreds of millions have been spent since SAIS was implemented 6 years ago, yet there is little to no improvement. It only ascertained that it is nothing but an academic accessory that drains the time, energy, and resources of UPLB’s constituents. Just like how we declutter objects that are no longer useful, UP should also junk a system that fails to serve the academe and its scholars. [P]

Graphics by Jase Michael Manatad – First published as a standalone Graphics on September 13, 2021.

Editor’s Note: This article was originally published in the Volume 48, Issue no. 1 of UPLB Perspective, last February 18, 2022 segment of the article lacked context, particularly the budget allotted to SAIS. The P751.9M budget is allocated for the entire eUP Project, not only SAIS. This has been corrected on February 21, 2022 in the online version of the article. Apologies for the oversight.