Almost a decade ago, the tragic death of Kristel Tejada uncovered the anti-student policies of the Philippines ’ premier national university concerning the cost of education– mirroring the government’s failure in upholding the basic right to education. The recent suspension of the Commission on Higher Education’s (CHED’s) scholarship program for incoming first-year students, due to ‘budget inadequacy’, only suggests that only little to none has since changed.

Contrary to President Duterte’s declaration in 2018, to foster the ‘empowerment of the youth’ through the implementation of Republic Act (RA) 10931 or the Universal Access to Quality Tertiary Education Act,  the postponement of CHED’s scholarship program for the fiscal year 2022 due to budget cuts stipulates the incoherence in the current administration’s resolve in delivering free quality tertiary education across the country, especially on top of the ongoing health and economic crises.

Under the Duterte regime, the education sector continues to be one of the social institutions that suffer the most from the neoliberal policies of the government, a framework that has since been inherited from the post-Marcos administrations. As the COVID-19 pandemic forced the termination of conducting traditional classes in the country, many, if not all, students were left with financial woes, coupled with personal issues, in coping with the transition to the remote learning setup. (READ: 4 out of 5 UPLB students unfit for remote learning – USC survey)

Consequently, the stopgap measures of the government concerning the continuity of education amid the crises have failed to mitigate the impacts of successive shocks (i.e. natural calamities and worsening political climate) and has only proven to do more harm than good by further burdening the economic, physical, and mental capacities of students through forcing them to partake in an outcome-based system. (READ: UPLB colsec numbers show that LOA, dropped cases up between 2 sems of 1st online acad year)

On the contrary, the crises have only generated more resistance from the studentry along with the other sectors of the society, prompting the government to attack educational institutions and individuals in its attempt to discredit and silence dissent. The Duterte regime’s propensity to instigate violence and repression in the name of reinforcing neoliberal principles in the society is a clear indication of how this political and economic thought is deeply entrenched in the state and foreign power’s political machinery.

Within the term of the Duterte administration, the country saw the passage of the Universal Access to Quality Tertiary Education Act. This unfortunately has plenty of implications on the landscape and accessibility of higher education.

The free tuition law has been in effect since the second semester of the academic year (A.Y.) 2017–2018. The immediate result could be seen in the number of enrollees on public Higher Education Institutions (HEIs). Since the pilot implementation of the law in 2017, based on the available data from the Commission on Higher Education (CHED), the number of students enrolled in public HEIs across the country was 1,385,458, almost 16% lower than 1,641,607 enrollees in the previous year.

Visibly, due to the budget constraints posed by the free tuition law, admission to state universities and colleges (SUCs), local universities and colleges (LUCs) and technical-vocational programs became more competitive– fewer individuals are able to access tertiary education in public institutions which is an outright contradiction of the mandate of the government to meet the demands of its constituents on education through judicious budget appropriation. 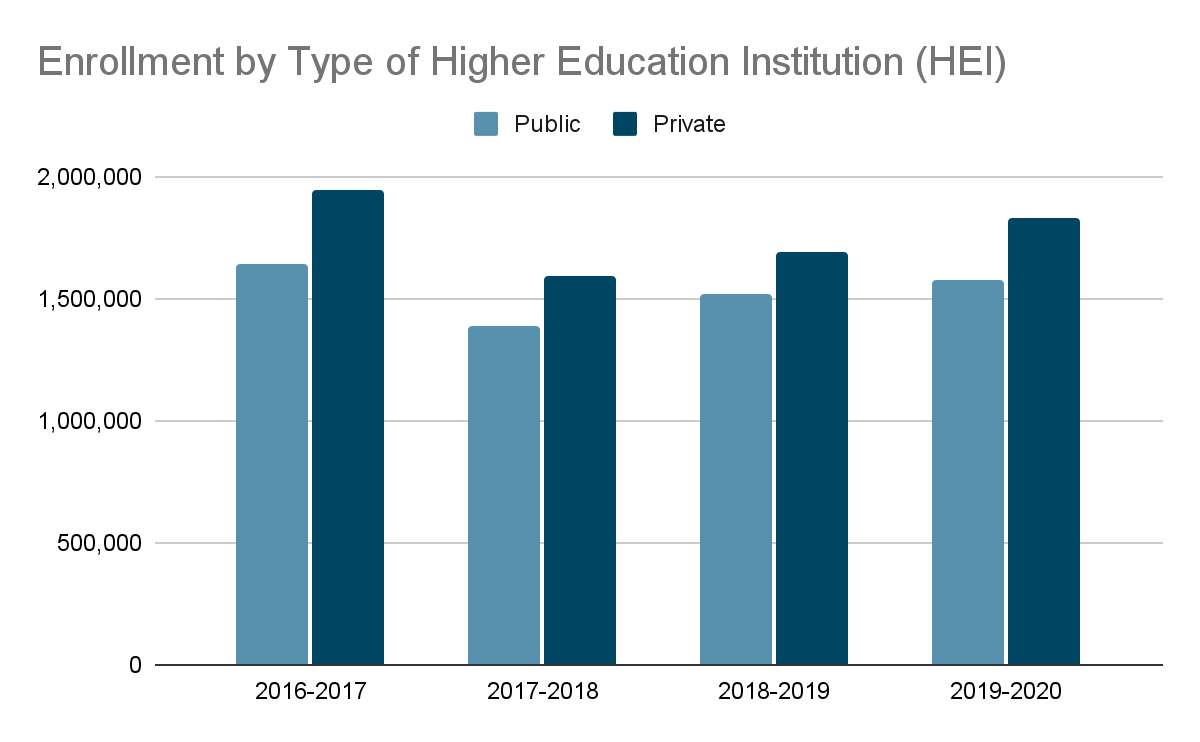 The data also exhibits that annual enrollment on private HEIs is relatively more as compared to public HEIs– this phenomenon is in consonance with the budget cuts in the education sector as the excess in the demand for tertiary education fosters the atmosphere of market-based solutions to fill in the shortcomings of the state, therefore further enabling privatization and commercialization of education.

On the other hand, the relatively fewer number of public HEIs have only translated into students competing for slots to avail the supposed benefits of the free tuition law. However, this inadvertently diminishes the equitable access for tertiary education as the current competitive admission processes to determine who gets to enter state-sponsored schools are skewed towards individuals who possess the academic rigors borne out of privilege and resources. 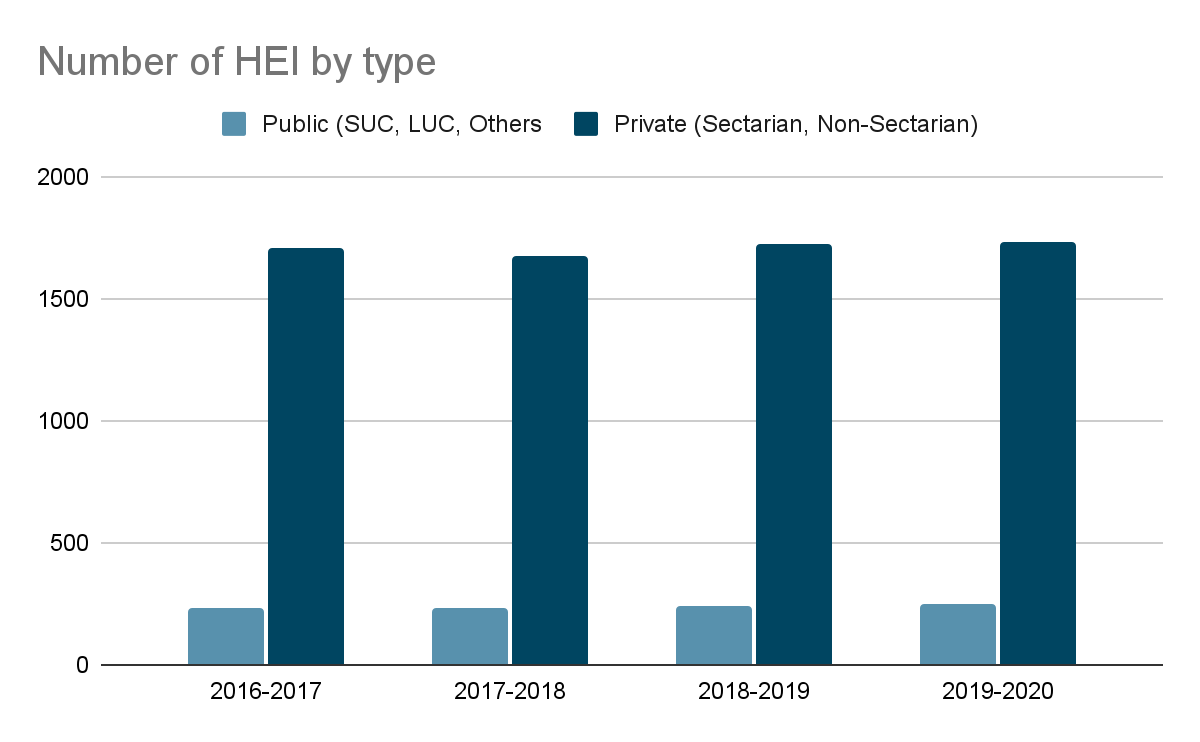 JC Punongbayan, an assistant professor from the UP School of Economics, detailed in his 2019 article that “ richer students have easier access to tutors and other resources in basic education,” thus giving them more advantage as opposed to their peers coming from lower-middle to low-income class families when it comes to school-sanctioned admission exams or policies.

While the current free tuition law has inadvertently intensified the educational gap between the rich and the poor, the threat is also felt across private HEIs. Recently, amid the onslaught of the pandemic, CHED approved the tuition and other school fees (TOSF) increase in 56 private institutions for A.Y. 2021 to 2022, through a memorandum order issued by CHED Chairman Prospero J. De Vera III late last year.

Students from the Ligtas Na Balik-Eskwela Now – Southern Tagalog (LNBE-ST), a youth alliance for educational concerns, condemned the said move of the government agency saying that this is unjustifiable and apathetic especially since the economic crisis brought by the pandemic has displaced many workers and ‘breadwinners’.

(RELATED STORY: Youth groups hold online press conference to discuss demands amidst worsening education situation)
The arbitrary increase in TOSF only goes to show that the real aim of the commercialization and privatization of education is to support the profit motive of the capitalists engaged in the education sector.

As the government maintains its position as an enabling body in the perpetration of commercialization, privatization, and deregulation in the education sector, it is without a doubt that plenty will be robbed of their future. Lest we forget, the memory of Kristel Tejada and countless individuals who fell trapped in the promises of neoliberalism is redeemed through tireless struggles aimed at the neutralization of the parasitic maneuvers of the powers that be.[P]

0 comments on “Lest we forget: Why the fight for ‘genuine’ free education persists”