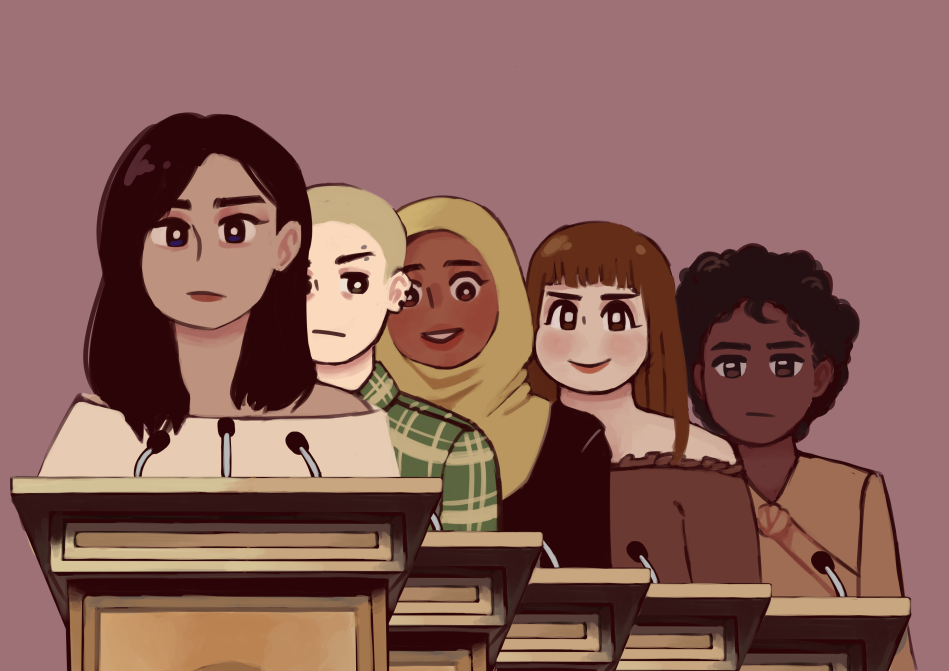 Even though women have fought for their place in the male-dominated field of politics, the way women’s images are constructed remains a disturbing phenomenon. While the likes of Halalan 2022 candidates Leni Robredo and Sara Duterte show how women can already be on par with their male counterparts, the country is far from truly achieving gender equality, and in worst case scenarios, women are accessories to this inequality. Albeit the changing role of women and contemporary Philippine feminism has challenged perspectives towards the Filipina, views influenced by gender biases, sexism and patriarchy still remain.

Because the political sphere is still generally dominated by masculine standards of leadership, they are caught in a “double bind” standard – a dilemma where the images of a woman are exclusive to one another and all other options result in penalties. They would get judged if they are too feminine or too masculine for society. If a woman leader is regarded as a “feminine” woman, she is believed to bear caring with soft qualities that are inferior and not fitting for a Philippine political leader. On the other hand, if she is deemed as a “masculine” woman, who asserts herself and takes charge, she may receive the approval for bearing traditional masculine qualities of leadership, but nevertheless, under a patriarchal society, she would still be criticized for being “difficult” and “problematic”. Sexist undertones and the patriarchal mindset have caged female candidates and politicians to be trapped and restricted among the limited options society allows them to represent themselves.

One image of femininity that we have observed in today’s politics is the one that embodies a caring and calm demeanor. The motherly-type of leader, if one would make a term for it. Robredo, who is running for president, is a good example of this image that we see in the upcoming elections. She frames herself as the mother who “loves radically”, willing to fight for her children against the current predicament of the country.

Robredo’s public femininity is defined a lot by how her campaign is run, and even with her political color, “pink”, is a color that popularly has feminine connotations. She is described as “calm and diligent, serene yet steely”, an antithesis to President Duterte’s aggressive and iron-fisted leadership. Being an actual mother might have influenced her leadership style, as seen as how her domestic functions mirror how she approaches the political arena, such as her hard work of feeding lugaw and pan de sal to the hungry despite her meager budget. Another instance would be how she approached the escalating tensions of Russia and Ukraine, stating that “We have to protect Filipinos in Ukraine” and praising the country for employing its relationships and alliances to stand up against a superpower country. Her answer is a clear manifestation of the motherly instinct that always prioritizes protecting her children (the Philippines) from danger. Not only Robredo, but in the past, former president Corazon Aquino has also adopted a domestic branding as her femininity, with her image as a housewife going hand-in-hand with her duties as a president (unfortunately, criticisms for Aquino and her anti-poor, anti-farmer policies will be discussed some other time).

Leni Robredo’s branding, however, puts her on a gamble with her attempt to redefine women leadership in politics, as her political color “pink” is seen as too feminine for the country’s “standards of leadership”. Even with a track record to boast, negative connotations seemed to spew from her critics left and right based solely on her femininity. Because Filipinos are so used to the kind of leadership represented by males, a woman with soft qualities is deemed as a weak leader and is held under high scrutiny as being incapable of running a country. Robredo has also been misjudged for talking too much without doing anything (“kuda lang nang kuda, wala namang ginagawa”). However, this type of femininity should never be seen and should stop being seen as inferior. We see mothers as strong people who have raised kids, managed their homes and worked for the family, but why can’t we apply this kind of mindset when it comes to women leaders?

The masculine woman is her father’s daughter

Another image that we have seen in women politics in the Philippines is the more assertive woman, the one who is thought to embody a more “masculine” side of femininity. Sara Duterte’s image is usually the tough-talking woman that is similar to how her father shows himself to the public. Her reputation as the mayor who punched a sheriff has imprinted on how we see Sara Duterte, and it is not surprising that her supporters applaud her for this kind of image that would mirror her father’s leadership but in a female exterior. Her proposal of mandatory military service also highlights this kind of assertiveness, heavily affected by her father’s militaristic mindset. She has also been seen to sport tattoos, wear an undercut, and ride an armored vehicle around the country. For her supporters, her iron fisted leadership is needed for a country that deals with a wide range of national issues.

But being a woman is not the front and center of her campaign, and perhaps, if Sara Duterte did not hold the Duterte family name, she would be subjected to the same scrutiny as Robredo for being a woman. People who supported President Duterte also have shown their inclination towards Sara because of her father’s family name. She was perceived as “Duterte first, woman second”, suggesting that her bearing a well-known family name somewhat saved her from the heavy criticisms women face in politics. However, in spite of the tough image she shows to the public, Duterte insisted Sara not to run for president, stating that women are still not ready for the highest position simply because they are women and that they should be protected from the dirt that politics would throw at them. This shows that women who also hold “masculine” attributes still face the internalized misogyny that doubts their capabilities of being a leader. An assertive and intimidating woman is still forced to conform and stick to traditional norms and submission under men. It seems as if there is a boundary that women are not allowed to step on, and no matter how “masculine” a woman is perceived, the patriarchy still keeps them in check.

Femininity covers a wide spectrum and women leadership should not be limited within the traditional range enforced by the gender stereotypes that were dictated by the macho-patriarchal system. Before the coming of Spaniards, women in prehistoric Philippines enjoyed free status without being bounded by clear-cut division of gender roles. They were given opportunities to become chief of the community while also staying close to their family. They were not dictated by what a competitive woman leader and a mother should be. In almost all Philippine ethnic communities, we can also find equivalents of the babaylan and catalonan in different ethnolinguistic groups, where women are regarded with no gender bias. During the Spanish era, those who were not contaminated by the “Intramuros ideology” saw how women never lost their firmness and endurance in working inside and outside their homes. In the present era, finding a happy medium is overly difficult. Women continue to be criticized and noticed from the smallest details, even down from the choice of clothing that they wear to how they present themselves to the public. Whether they transgress from relevant gender rules, conform, or do both, women have no place to go where sexist eyes do not trap them under constant scrutiny.

With such standards prevailing, women walk on a tightrope, carefully navigating the spectrum and trying to balance both sides, something male leaders and candidates rarely encounter. The gender inequality faced by women in terms of stereotypes and contrasting image of what constitutes as too feminine and too masculine for women is linked to the many systems of domination and oppression. It is not enough to advocate for a single idea of Philippine feminism, as the fight for equality transcends wide range of women in the country. So long as the patriarchal society continues to exist in the Philippines, women remain caged in a double bind standard of femininity and masculinity. There should be no such quality as being too feminine or too masculine for a woman. These images of Philippine femininity should not be pitted against each other but instead, both should be criticized based on their ability to alleviate the pressing needs of the Filipino people. It is through challenging and criticizing the status quo can women leaders be free from the binds of patriarchy, and for them to carry out pro-people policies. [P]

3 comments on “The Double Standards of Femininity in PH Politics”