In this century where media’s reliability is being questioned, widespread disinformation and misinformation are at the center of tarnishing the reputation of mass media. According to a report released by the researchers at Oxford University, the Philippines is part of taking and having social media manipulation, troll farms, and disinformation, specifically aided by its politicians and political parties alike. Recently, the country has just elected a new president through the help of rampant disinformation. Marcos Jr.’s upcoming presidency will therefore be a battle between disinformation and truth.

While most of the masses still recognize mainstream media as a reliable source of news, social media remains one but is often the source of misinformation and disinformation. Classes D and E are the most affected and often the victims of such because they can only do so much with limited free data. Fact-checking is not included in this.

It is now evident why all aspects and forms of media – television, radio, internet, etc. – are the politicians’ and political parties’ primary targets. The media has the platform to disseminate both information and ideologies to the public. It does not only assist in creating ideas but also promotes them. Therefore, media greatly influences people’s ideology, especially their political views.

As another Marcos comes back to the seat of power, what would be the greatest threats that the media would experience under his administration? If the administration of Duterte successfully shut down the ABS-CBN Network, how will the next administration control and silence the media?

Media has the widest scope of lenses; it is the most successful carrier of ideologies because it reaches varying numbers of audiences. It extremely affects people’s ideology and sometimes political attitudes. It is the site of ideology dissemination where most ideas are powerfully circulated and contested.

Some Philippine media are state-owned. The government has jurisdiction over three television stations and one radio network in the country, namely, PTV 4, RPN 9, IBC 13, and Radyo ng Bayan. RPN 9 broadcasts the CNN Philippines channel, which tops in Pahayag 2022 First Quarter Survey as the most trusted news outlet, along with GMA-7. Radyo Pilipinas, also government-owned under the Presidential Communications Operations Office, ranks among the most trusted stations. The fact that these state-owned media outlets have a high trust rating is concerning. We cannot ignore the fact that these government media outlets can be biased toward the administration in their releases. Radio Philippines Network (RPN 9) and Intercontinental Broadcasting Corporation (IBC 13), for instance, had a history of censorship and were owned by Marcos’ eldest daughter after the end of her father’s regime. 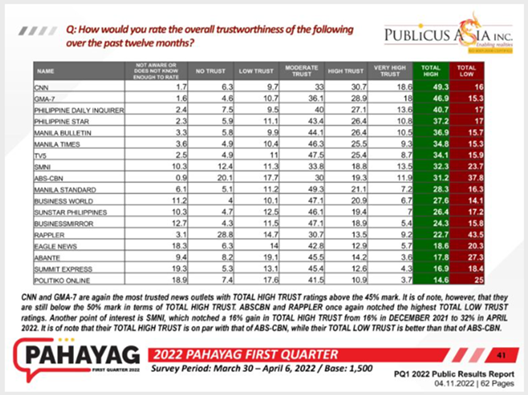 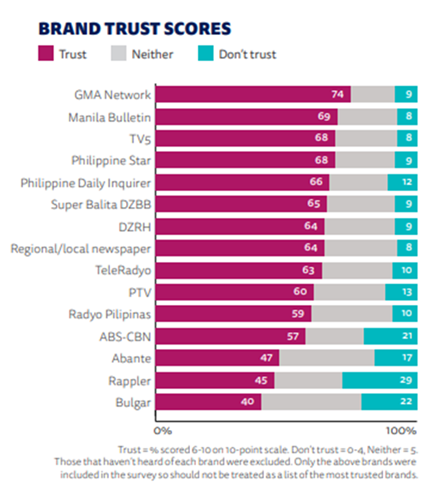 Meanwhile, ABS-CBN and Rappler continue to hit their lower trust ratings in the past years; coincidentally, both media brands are the most attacked by the Duterte administration. ABS-CBN, the Philippines’ largest media network, was shut down in May 2020, resulting in almost 11,000 employees losing their jobs. In July 2020, the House Committee rejected ABS-CBN’s franchise application. President Rodrigo Duterte accused the network of tax evasion and for allegedly not airing his political ads in 2016. Former House Speaker Allan Cayetano also accused the network’s coverage, saying they favored other candidates during the past elections (Cayetano was Duterte’s running mate in the 2016 election polls). ABS-CBN was then branded with the ideology of being “leftist” and “biased” against the government. The last time ABS-CBN was shut down by the government was in 1972. It was the year when the two-decade Martial Law dictatorship started under the late dictator Ferdinand Marcos who had also manipulated and controlled the media.

On the other hand, SMNI, owned by Apollo Quiboloy, an FBI-wanted person for his alleged participation in unlawful activities and who publicly expressed his support to the now President-elect Bongbong Marcos and Vice President-elect Sara Duterte, doubled its trust rating from 16% last year to 32% in April 2022. People who support Bongbong Marcos and Sara Duterte labeled the network as unbiased and called the mainstream media, especially ABS-CBN and Rappler, biased and left-leaning. The proposition that ABS-CBN and Rappler are biased to the left is forcibly established as a fact through the power of hearsay and disinformation. The “right-wing” tries to prove its claim by showing how these networks feature news that only shows the negative side of its candidate while saying that these same news outlets favor the left. However, legitimate news media is, in fact, the bearer of truth – the selection of issues and stories that will be broadcasted is nothing but reportage of reality. What differentiates ABS-CBN and Rappler from SMNI then is that, while the latter favors certain political figures, the former only favors the truth. And if this is what it means to be biased, then ABS-CBN and Rappler are biased towards the truth. But the state seems to hate how the media only reports the reality.

While it reports the truth, there are instances wherein the media does not reflect the real world. What the lenses show differs from what the reality is. Media, in this way, is considered a form of communication that gives privilege to certain sets of ideas while downplaying the reality of others.

For example, in the class system of society, capitalists have always been exploiting the workers by capitalizing on their labor. And in the defense of the private corporations, they might say that they are “the economy that works for everyone.” But accepting this idea requires having a capitalist ideology, which people may come to reject due to their social reality. And such rejections often result in on-ground mobilizations. At this event, the media will present “both” sides: the laborers or the union and the employers or the capitalists. For the union, this is worrisome as the strike is more likely to be misinterpreted by the public depending on how the media will report it. We can only understand the grievances and progressiveness of the union when we look much deeper. But the capitalists are given such a privileged platform to talk in news media under the assumption of having the authority and credibility to speak. And sad to say, these voices are assumed to matter the most. From this, it is easily shown how the media has an obvious “class element” on it.

Marxism’s view on ideology reflects this. It sees ideology as a powerful mechanism of social control that is used by the ruling class to forward their own interests. In other words, the ruling class extremely influences the people, from what people should be thinking and what ideas are favorable to a capitalist society, through an ideology that masks their own interests as the general interests of everyone. They successfully spread such ideology because they have the ‘means of mental production,’ from entertainment and culture to news and media industries.

This Marxist view also mirrors the upcoming presidency of another Marcos. To control the ‘means of mental production,’ the threat of silencing the media continues to exist. During the Martial Law regime of Ferdinand Marcos Sr., numerous journalists were killed. The Marcos regime censored and manipulated the information. Their wealth and money, in addition to his political power, hid the truth about the Philippine situation for two decades. All information about the Marcoses during that time was kept secret if they are not “the true, the good, the beautiful.” On the other hand, during Marcos Jr.’s presidential campaign, reporters had difficulty reaching him for an interview. Widespread misinformation and disinformation had also been laid out to the public, and historical revisionism and distortion became Marcos Jr.’s greatest allies. Despite the fact that the “legitimate” media holds greater credibility, it is now being accused of appealing to sensationalism, misinformation, and disinformation ever since Marcos Jr.’s public appearances during the campaign period.

Indeed, media being the lens of ideology might concentrate on some particular ideological perspectives where the ruling class often takes charge of controlling the steering wheel. Media is not a mere carrier of the dominant ideology, but media itself is a battleground of both class conflicts and multifaceted politics. This is clear by how Bongbong Marcos Jr. won the presidential race with the help of disinformation and manipulation of the media, particularly social media. Such, this became a threat to mass media’s credibility, cementing the extension of the ability to manipulate information from the dictator father to the son. With the media being shut down in the past and another Marcos coming back to the seat of power, the threat of history being repeated is already there. But let’s hold our ground and firmly resist it. Let’s defend our press freedom. [P]

0 comments on “Media: A battlefield of ideologies, classes, and politics”