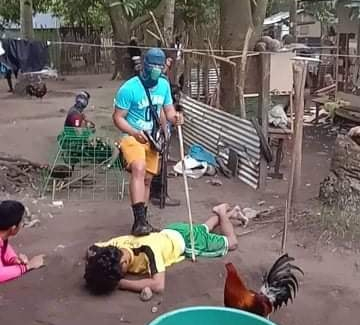 Without a court order or uniforms to proceed with an official, legal operation, the men arrived at the scene to fulfill one objective: demolish their homes and fish them out of their lands, progressive cultural arm Panday Sining Batangas said while detailing the harassment laid upon the fisherfolk.

Despite the residents’ best efforts in fending off the invaders of their homes, 30 houses were demolished, seven of which were completely ransacked by sledgehammer-wielding intruders, two residents being injured, and items such as money and mobile phones were reportedly taken from them.

Panday Sining Lipa also reported that 21 of the perpetrators were now jailed for charges of Multiple Robbery in Band, Frustrated Murder, Multiple Attempted Murder, Multiple Malicious Mischief, and violating Republic Act 10591 or the “Comprehensive Firearms and Ammunition Regulation Act”. However, about 70 of them were reportedly still at large.

The root of this issue being pertained to is said to be the company itself.

MSDC is a company owned by the Sy clan, the family of late business magnate and SM Malls founder Henry Sy, and is one that has long been involved in land-grabbing issues. One such involved the 8,650-hectares worth of land in Hacienda Looc, where Brgy. Papaya is located.

The 3,981 hectares that were initially given to farmers up until 2004 have been involved in a lengthy tug of war against Sy and his agents, who were building their Pico de Loro resort over their lands. A 2009 report from The Pamalakaya Times said that Sy was gunning for eco-tourism programs, as well as an 18-floor condominium in the area, which was condemned by farmers and fishers since its inception.

But MSDC’s shopping spree for lands did not end in Nasugbu.

In 2016, Anakpawis representative Ariel “Ka Ayik” Casilao condemned the “overkill” demolition operations that took place in the rurak Brgy. Sta. Mercedes in Marogondon Town, Cavite, which was close to the border next to Nasugbu. Otherwise known as “Patungan,”  Maria Theresa Virata Investment Holdings Corporation (MTVIHC), alongside partner MSDC and Margondon’s own local government unit (LGU) for conspiring to evict 350 fisherfolk and farmer families and use their 600-hectare beachfront for their ecotourism projects.

“It is an overkill and we condemn this ruthlessness, the community only covers more than 300 rural households, but the force deployment is comparable to a police-military operation,” Casilao said.

Anakpawis, however, noted that MSDC denied any involvement in the incident. Two more attempts at evicting the residents came in 2017 then a final notice to vacate just this March.

The company was mentioned by farmer group Katipunan ng mga Samahang Magbubukid sa Timog Katagalugan (KASAMA-TK) in reference to the construction of the Sangley Point International Airport in Cavite City — a part of China’s One Belt, One Road Initiative (ONOR), and is funded by the Chinese government through a loan package to the Philippines. The ONOR is a gigantic trade route built to be deemed as the massive trade capital across Asia, and is currently running and in operation